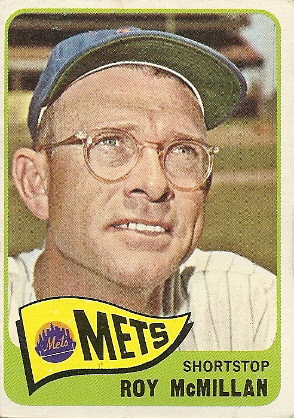 Check out the designer frames on veteran shortstop Roy McMillan! Though you surely wouldn't hit a man with glasses, you're obviously not a National League pitcher. Roy placed in the top ten in hit-by-pitch five times in the N.L. in his 16-year career. That's gotta sting.

Texas-born Roy McMillan signed with the Reds in 1947 and served a four-year apprenticeship in the minors before debuting with Cincinnati at age 21. After struggling to hit in his first season (.211), the young shortstop showed improvement in 1952. He cracked 32 doubles (third-best in the N.L.), added seven home runs, and drove in 57. It would be a career trend for Roy: low batting average, but decent pop - particularly by shortstop standards. It would be his glove that made him a valuable starter, though. In 1954, he set a record (since broken) by turning 129 double plays. From 1957-1959, he won Gold Gloves in the first three years they were awarded. The late Fifties were kind to McMillan, as he also made back-to-back trips to the All-Star Game in 1956 and 1957. 1956 brought personal bests in RBI (62) and walks (76), and the following year he hit a career-high .272. The latter year he was caught in the crossfire of a controversy, as Reds fans stuffed the ballot box to place Roy and six teammates in the starting lineup of the Midsummer Classic. The league intervened, removing Wally Post from the team and Gus Bell from the starting lineup. McMillan and the other four Redlegs remained in the starting nine.

In December 1960, after a decade in Cincinnati, Roy was on the move. The Reds traded him to the Milwaukee Braves for Juan Pizarro and Joey Jay. His three-plus seasons up north were unremarkable, though he set a new personal best with 12 home runs in 1962. In May 1964, after getting into just eight games in the first month of the season, the shortstop again found a new zip code. He was dealt to the sorry Mets for pitcher Jay Hook and a player to be named later. The end was near for McMillan; in his three years in New York, he failed to post a slugging percentage or an on-base percentage above .300. For his career, he batted .243. Five years after his retirement, he was elected to the Reds' Hall of Fame.

Roy stayed in baseball after hanging up his glove, coaching and managing in the Mets' organization from 1967-1969 before returning to Milwaukee as a Brewers coach from 1970-1972. He served as interim manager for two games, splitting decisions while bridging the gap between Dave Bristol and Del Crandall. It was back to the Mets as a coach in 1974. The following year, team brass fired manager Yogi Berra with the club in third place at 56-53. Again, McMillan was installed at the helm. The Mets continued to tread water, going 26-27 under the interim skipper and staying put in third. He was not brought back for 1976, but did spend 1977-1980 managing in the Twins organization, winning a league championship with the A-level Visalia Oaks in 1978. Roy passed away in 1997, ten years after being selected to the Texas Baseball Hall of Fame.

Fun fact: Roy hit two home runs off of Joey Jay and one each off of Jay Hook and Juan Pizarro; he victimized all three pitchers that he was traded for at various points in his career. 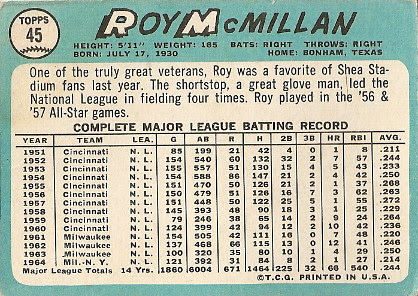