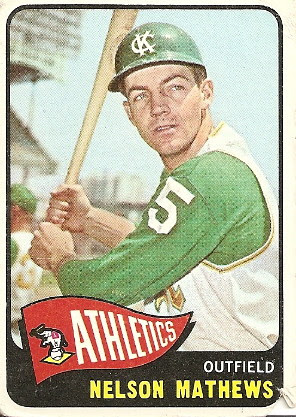 Outfielder Nelson Mathews is the first Athletics player I've posted in a while. He's posed while wearing a batting helmet, a rare sight in this set. The #5 on his sleeve is front and center, one of the more distinctive features of the unique A's uniforms. You can also see a teammate in the background. Based on the positioning of the number on the anonymous fellow's back, I'd say that it's in the thirties, rather than an outright #3.

A tall (6'4"), thin outfielder out of Columbia, Illinois, Nelson Mathews stayed close to home by signing with the Cubs for a $25,000 bonus in 1959. His offensive performance was uneven in four years of minor league play, though he did lead the Texas League in 1961 and the Northwest League in 1962 in triples. The latter year represented a breakout for the youngster, as he hit .368 with 54 extra-base hits for the Wenatchee (WA) Chiefs. Based on these numbers and a successful September with the big league club (.306 with 13 RBI in 15 games), he finally appeared to have spot on the Cubs roster after receiving the briefest of looks in 1960 and 1961.

Former Cubs first baseman and manager Charlie Grimm, who was a coach for the team during Mathews' time in Chicago, liked what he saw in the outfielder, likening his fielding to that of Yankees Hall of Famer Earle Combs. Unfortunately Nelson couldn't quite hit like Combs, at least not in 1963. Though he spent the whole season in the majors, the 21-year-old received just 155 at-bats, batting a paltry .155 (what an unwelcome coincidence!). The Cubs washed their hands of him that December, trading him to the Athletics for pitcher Fred Norman.

1964 would be Nelson's only season as a major league regular. He hit .239 with 14 home runs and 60 RBI. His 27 doubles were second-best on the team , trailing the duo of Wayne Causey and Rocky Colavito (tied with 31 each). He led the American League in the dubious category of strikeouts, whiffing 143 times. As Kansas City's everyday center fielder, he showcased the pluses and minuses of his range, leading the league in both putouts (381) and errors (13). In 1965, Mathews was supplanted in the starting lineup by veteran Jim Landis. Despite hitting .212 overall and only coming to bat 184 times, Nelson's seven triples placed seventh in the A.L., five behind co-leaders Bert Campaneris and Zoilo Versalles. At age twenty-three, when most players are just getting their start in the majors, Nelson Mathews was playing his final game.

Nelson's name would come up again thirty years later, when his son T. J. made his debut with the St. Louis Cardinals as a righthanded pitcher. He would go on to have an eight-year career, winning 32 games and saving 16 with a 3.82 ERA. He's best known as one of the three players traded from St. Louis to the A's for slugger Mark McGwire. He was coached in St. Louis by Dave Duncan, who in 1964 was briefly a teammate of Nelson Mathews!

Fun fact: Nelson's first big league home run was a first-inning grand slam off of Stan Williams, giving Cubs starter Bob Buhl all of the support he would need in a 5-0 win over the Dodgers. 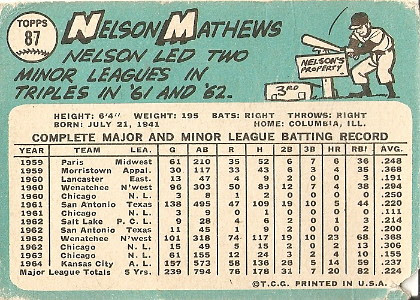