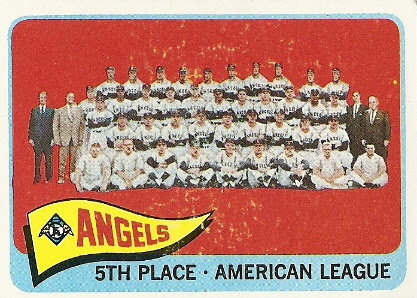 No time to sit and ponder tomorrow's election thingy, we've still got a backlog of cards to post, with more on the way from Max, who I am hereby dubbing the Patron Saint of The Great 1965 Topps Project. So let it be said, so let it be done. This blood-red card would probably have been more apt on Halloween, but it'll have to do today. It features an out-of-focus photo of Bill Rigney's Los Angeles Angels.

As you can see, the Halos brought up the rear of the first division with a middling 82-80 record, 17 games behind the AL champs from New York. But in the big picture, that's pretty good for a fourth-year franchise that had lost 91 games in 1963. The Angels actually gave up a few more runs (551) than they scored (544), but it was a close call. They were the second-class citizens of Dodger Stadium, drawing just over 3/4 of a million fans. By contrast, the 80-win Dodgers drew 2.2 million, best in the majors by nearly one million fans!
The Angels were a pitching team with a hitting problem, placing eighth out of ten teams in average (.242), ninth in on-base percentage (.303), and dead last in slugging (.344). The load-bearers on offense were veteran first baseman Joe Adcock (21 home runs) and young shortstop Jim Fregosi (team-leading 49 extra-base hits, 72 RBI, and 72 walks). Fregosi was a fan selection to the All-Star Game for the first time in his career. Other bright spots among Angel batters were outfielders Willie Smith and Jimmy Piersall, who each batted over .300. Smith actually entered the season as a two-way player before the offensively-deficient Halos pulled him off of the mound and anointed him their everyday left fielder!
As I mentioned, pitching was the strength of the Los Angelenos in 1964. They had a formidable young threesome at the top of the rotation, with former Oriole farmhand Dean Chance turning in a season for the ages. The 23-year-old led the A.L. in wins (20), ERA (1.65), complete games (15), and shutouts (11). He finished just 10 strikeouts short of a pitchers' Triple Crown, was selected as an All-Star, and was the runaway choice for the Cy Young Award (there was still just one award given for the entire major leagues). He was complemented by Fred Newman (13-10, 2.75) and Bo Belinsky (9-8, 2.86 in 22 starts). The bullpen was just as solid, with none of the top five relievers posting an ERA above 3.85. Closer Bob Lee (6-5, 1.51 ERA, 19 saves) led the way. The Angels' league-leading 28 shutouts played a major role in their 2.91 club ERA, which was second-best in the A.L.
Despite some promising young stars, the Angels never did get anywhere, wallowing in mediocrity until the free agency era delivered the likes of Bobby Grich and Don Baylor to Anaheim. The club won their first West Division title in 1979 under recently-retired shortstop Jim Fregosi (how about that?), but waited until 2002 to reach - and win - their first World Series. 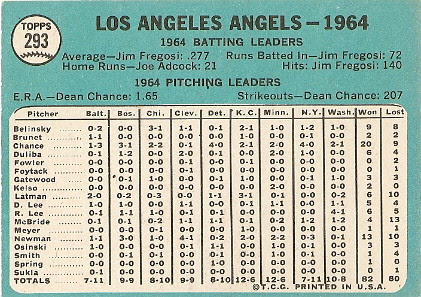