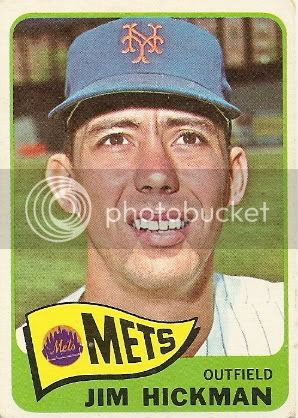 I'm not sure of the reason for Jim Hickman's anguished look in this photo. Maybe someone just called him "Piano Legs". Then again, maybe it's just the general sort of anguish that came with playing for the Mets in the 1960s. Jim had a fascinating, trivia-rich career, which I never would have expected. It's days like this that I'm happy to be doing this blog!
Fun facts about Jim Hickman:

-A proud son of Henning, TN, Jim signed with the Cardinals in 1956 as an amateur free agent.
-Languished in the St. Louis organization for six years before being claimed by the Mets in the Expansion Draft.

-Was a fairly average player as a Met, hitting double-digit home runs for four straight seasons and batting .241.
-Did have several landmark performances in New York, including the first cycle in team history. It was a natural cycle, in that he hit in order: single, then double, then triple, then home run. Walloped the last home run in the Polo Grounds on Sept. 18, 1963. On Sept. 3, 1965 he became the first Met to hit three home runs in a game (all off of Ray Sadecki).

-Had a flair for the dramatic, hitting seven walk-off home runs in total. One of these was a grand slam against the Cubs on Aug. 9, 1963, and it snapped Mets pitcher Roger Craig's record 18-game losing streak!
-Wore out future Hall of Famer Steve Carlton. In 69 trips to the plate against "Lefty", Jim hit .293 with two triples and four home runs and racked up a .975 OPS. 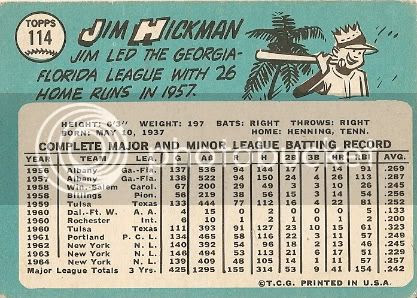