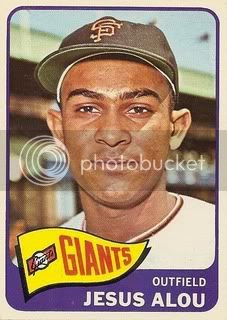 A few weeks ago (yes, weeks! I'm four cards away from being caught up!), reader George DeVerges and his father sent me this extra Jesus Alou card they found in their collection. Thanks, guys!

There's a joke based on the old Christian slogan "Jesus is the answer". It suggests that the question must be, "Who is Felipe and Matty's brother?".

-Jesus was born in Bajos de Haina, in San Cristobal, Dominican Republic. He signed with the Giants as a teenager in 1958.

-He was the youngest of the three baseball-playing Alou brothers, and is the uncle of Moises Alou and Mel Rojas.

-After a September 1963 callup, Alou became a regular in the San Francisco outfield in 1964. He batted .274 as a rookie, but seldom walked or hit for power. In his entire career, he would top 100 in OPS+ in only two seasons, both as a part-timer.

-In his 30s, Jesus became a pinch hitter and bench player with some positive results. He batted .312 in 102 trips to the plate for the Astros in 1972.

-Alou worked as an Expos scout in the 1980s and 1990s, and has been director of Dominican operations for both the Marlins and Red Sox. 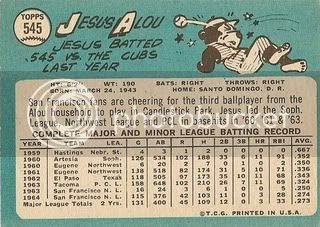