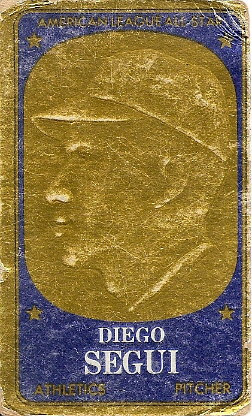 Here's an interesting diversion from the base set. It also kicks off a batch of sixteen cards that I received from reader Ed, who gets his pick of my Orioles doubles just as soon as I have them all sorted. Younger collectors might not realize that Topps has been doing inserts for so long, but it's true. The card you see above is part of a one-per-pack insert set that comprised 72 cards in total. Each of the 20 MLB teams had three or four players in the set with the exception of the Senators (two) and the Indians (five).

These are pretty gaudy by any standard, featuring a profile portrait of the player completely embossed in gold. The American Leaguers had blue borders, and the National Leaguers had red borders, which were a bit rougher on the eyes. Dayf, the Cardboard Junkie, recently picked up a Lee Maye Embossed to complete his Braves team set; you can see it here. The backs of the cards are nearly blank, save for the card number and copyright info in a box at the bottom.

Of course as you can see, my Embossed card does have an extra special touch on the back. Someone attempted to trace Diego's head from the front to the back, with...mixed results. He looks like some sort of half-moose hybrid. An odd detail I noticed on the front is just how prominent they depicted Segui's Adam's apple. That thing's just kind of hanging there. I'd go into more detail about his career, but his base card is sitting in the queue to be posted in the coming weeks and I don't want to use up my material.

So what do you think - should I try to complete this set along with the base cards? I'm definitely interested in collecting the four Orioles: Brooks Robinson, Milt Pappas, Boog Powell, and John Orsino. 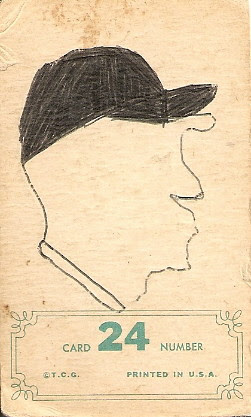