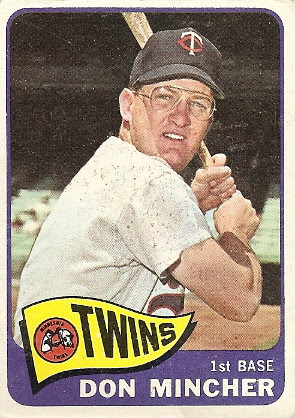 Sorry for the slow-down in posting this week. Sometimes there just aren't enough hours in the day to do everything, you know? Anyway, we're still in the middle of a batch from Ed, and here's beefy Alabamian Don Mincher. It's somewhat surprising how many players in this set have glasses, compared to contemporary players. Then again, we are pre-dating contact lenses in the mid-Sixties. Soft lenses didn't hit the U.S. market until 1971, as Wikipedia tells it. But I digress.

Originally signed by the White Sox in 1956, Don had his best year in the minors two seasons later when he hit .330 with 23 home runs and 97 RBI for the Davenport DavSox. In 1960, Chicago traded him along with catcher Earl Battey and $150,000 cash for veteran Senators first baseman Roy Sievers. Mincher would eventually become the only player to suit up for both Washington franchises, as well as their relocated reincarnations (the Twins and Rangers). He showed flashes of power and patience in short stints and part-time play from 1960-1962, then announced himself with 17 home runs in 225 at-bats in 1963. He also batted .258, which would actually be on the high end of his career range.

As Mincher's playing time gradually increased in 1964-1965, he delivered back-to-back 20-homer seasons for the Twins. In the latter year, he struggled in the Twins' seven-game World Series loss to the Dodgers, hitting just .130 with a single home run. The roundtripper did come against Don Drysdale in a Game One win, at least. After slumping to 14 dingers in 1966, "Minch" was dealt to the Angels in a package for pitcher Dean Chance. He rebounded, turning in his finest all-around effort with a .273 average (tenth-best in the A.L. in a pitching-heavy year), 25 homers (fifth-best), and 76 RBI. Selected to his first All-Star Game, he also had a pinch single off of Bob Gibson. After another down year in 1968 (.236-13-48), Don was exposed in the Expansion Draft and chosen by the Seattle Pilots.

Much of that lone season with the dreadful Pilots was preserved expertly in Jim Bouton's Ball Four. He spoke of his initial prejudice toward the drawling, Johnny-Cash-loving Mincher, but also admitted that his first impression was wrong. The first baseman was depicted as a good-natured, All-American guy; in one anecdote, he frets about his mother seeing him play and fussing over the lack of a protective earflap on his helmet. He was also apparently a good teammate, serving as team representative in the players' union and engaging in much of the horseplay in the locker room. Like most players, he wasn't thrilled with Bouton's airing of the team's private moments, but the worst dirt on Mincher consists of a few conversations about amphetamine use and a story about him punching out outfielder Wayne Comer for taking a homo-erotic game of chicken a little too far. On the field, Don was the team's only All-Star, again bashing 25 longballs and driving in a career-best 78 runs.

Traded by the Pilots just after they'd moved to Milwaukee, Mincher reached a personal best with 27 home runs for the 1970 Oakland Athletics. The following season he hit .280, another high-water mark, but socked just 12 HR in 415 at-bats with the A's and the new Senators club. He followed the team from DC to Texas for 1972, but was traded back to Oakland in July. His final game was Game Five of the 1972 World Series; he finished his career as a World Champion when the A's topped the Reds in seven games. For his career, Don hit exactly 200 home runs.

After retirement, Mincher opened a sporting goods store back in Alabama and also served as president and general manager of the Huntsville Stars of the AA Southern League from 1985-2001. In 1994, he and a group of investors purchased the team to keep it local. He sold his stake in the Stars in 2001 to become the permanent president of the Southern League. Just a few months ago, he was elected to the Alabama Sports Hall of Fame and had his #5 retired by the Stars.

Fun fact: Don hit two home runs in his first partial season in the majors. The pitchers were Milt Pappas and Whitey Ford. Not bad for your first pair of four-baggers! 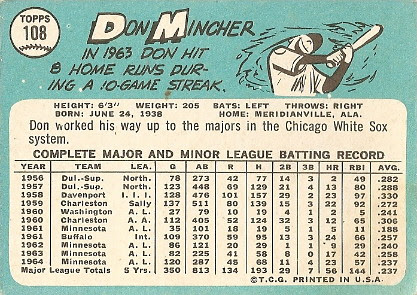