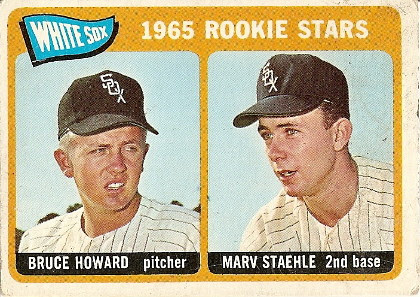 Believe it or not, the next bunch of cards that I'm featuring came from Max - and there's more where these came from! Today we've got another two-player rookie card, this one featuring the brightest of the young White Sox. Bruce Howard almost seems to be staring at Marv Staehle in disgust, as if Marv just cracked a lousy joke. Some people are so difficult to please.

Howard hailed from Salisbury, on the Eastern Shore of Maryland. He signed with Chicago in 1962, and was debuting in the Windy City just a year later. He beat another rookie pitcher in an exhibition, leading the White Sox to keep him and release the other hurler, one Dennis McLain. Bruce posted strong earned run averages over ten games with the Pale Hose in 1963-64 (2.65 and 0.81) before landing a regular spot on the club in 1965. He went 9-8 with a 3.47 ERA and 120 strikeouts in 148 innings.

The following season was Howard's best as a major leaguer; he won nine, lost only five, and posted a 2.30 ERA and 1.03 WHIP. He slumped to 3-10 in 1967, but his 3.43 ERA was still solid. After heading to Baltimore along with Don Buford in an offseason trade, the righthander struggled with his control, walking 49 and striking out 42 while putting up a career-worst 4.74 ERA for the Orioles and Senators. At the age of 25, Bruce's time as a big leaguer was abruptly over, despite a tidy 3.18 career earned run average. His son David had a longer career, lasting nine years (1991-1999) as a utility player for the Royals and Cardinals.

Fun fact: Bruce allowed three of his 45 career home runs to the Orioles, and all three were hit by Curt Blefary.

Among card collectors, Marv Staehle may be best known as a guy who appeared on three of these Rookie Stars cards: this one, a 1966 card that he shared with Tommie Agee, and a 1969 Seattle Pilots card that he occupied alongside Lou Piniella (neither appeared in a single game for Seattle). He was also the Player To Be Named Later in the 1967 trade that brought Rocky Colavito to Chicago. The second baseman played just 53 games from 1964-1967 with the Pale Hose, totaling one extra-base hit and five RBI. He got his only significant playing time as a major leaguer with the second-year Expos in 1970, batting .218 with a massive .252 slugging percentage in 104 games. In 1971, he went 4-for-36 with the Braves to cap off his major league career.

Fun fact: Marv's only big league home run came on September 21, 1969, as an eighth-inning solo shot off of the Phillies' Lowell Palmer gave Montreal a 7-6 win. 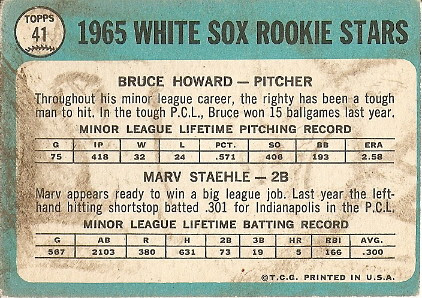