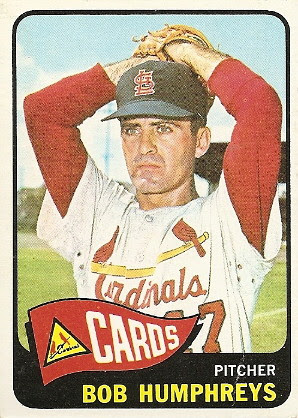 It's a good thing that the hypnotic death glare of reliever Bob Humphreys is not fixed directly into the camera; otherwise, there is no telling how many impressionable children in the 1960s would have been mesmerized into becoming the Artful Dodgers to Bob's Fagin. (NOTE: To my knowledge, Bob Humphreys was not the ringleader of a band of child pickpockets.)

A college boy, Humphreys was signed by the Tigers out of Hampden-Sydney College in Virginia. Utilizing a "side-saddle" delivery, which I would love to find a picture of, he put together a decent minor league record in five seasons. He could not replicate those results in his first two callups to the majors, with Detroit (1962) and St. Louis (1963). But the Cardinals recalled him in July of 1964, and he was a reliable bullpen arm down the stretch as the Redbirds chased down the Phillies. He struck out 36 batters in 42 and two-thirds innings, posting a 2.53 ERA. Bob added a scoreless inning of relief in the Cardinals' World Series triumph over the Yankees.

The following April, Bob was dealt to the Cubs. Though his strikeout rate dipped, he was still effective, twirling to the tune of a 3.15 ERA. The grateful Cubbies traded him once more, this time to the Senators for washed-up outfielder Ken Hunt. Fortunately, Washington held on to the reliever for a few years. He placed in the top ten in the league for games pitched in both 1966 and 1968, and his earned run averages ranged between 2.82 and 4.17 in his four full seasons as a Senator. After being released in June of 1970, Humphreys caught on with the Brewers and finished what would be his final big league season with a 2.92 ERA. In parts of nine seasons, he finished 116 games (but saved only 20) with a 3.36 earned run average that was just a hair above the overall league average for his career (3.40).

Bob returned to his home state as a coach for the Virginia Tech baseball team from 1974 through 1978.

Fun fact: Bob gave up one inside-the-park home run in his career. The batter was Bert Campaneris, the runner who scored ahead of him was Dick Green, and their runs were the difference in a 4-3 Athletics win over the Senators on August 2, 1966. 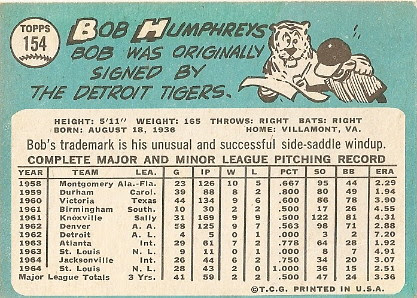