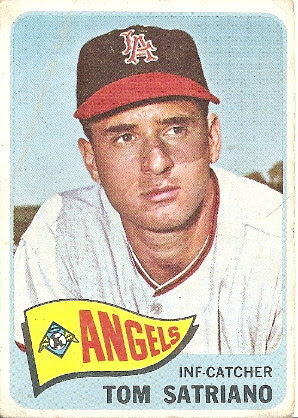 This is an especially pensive shot of young utility player Tom Satriano, whose cap bill seems inordinately large; there's a lot of red showing there. Maybe he's worrying about whether he will hit enough to stay in the major leagues.

Tom was a rapid riser after being signed away from the University of Southern California in 1961. He made the jump straight to the majors at age 20, and hit a home run in his first at-bat. Unfortunately, the game was called off due to rain, and the clout was wiped out of the record book. He hit just .198 in 35 games as a rookie while playing all around the infield. He spent most of 1962 at Hawaii and slugged 21 home runs. The following year he pinged between Los Angeles, Hawaii, and Nashville, with no tangible results.

1964 was the first year that Tom spent entirely in the majors, playing 108 games. He added to his versatility by learning to catch, logging 25 games behind the plate, but still didn't do much with the bat (.200 with 1 HR). After three more seasons of sub-average offensive production, he ironically had his best performance in a year that was dominated by pitchers. While the rest of the league was hitting a collective .230, Satriano hit .253 in 1968 with 8 homers and 35 RBI, all career highs. I suppose the Angels sold high, trading him to Boston the following June for veteran catcher Joe Azcue. 1970 proved to be Tom's last year in the major leagues, as he hit .236 in 59 games.

In a more unique example of a baseball family, Tom's daughter Gina pitched for the Colorado Silver Bullets, a women's professional baseball team that traveled in the mid-1990s and challenged mens' teams to exhibition games.

Fun fact: Nine of Tom's 21 career home runs were hit off of pitchers named Jim! He victimized Perry, Bouton, and Hardin twice each. 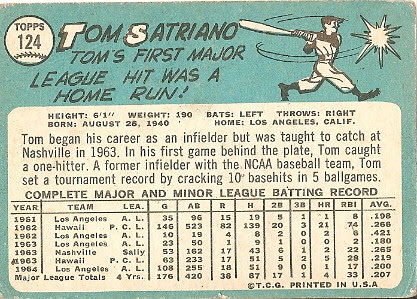