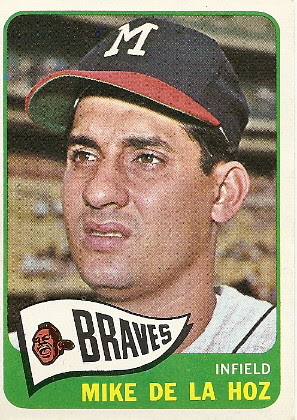 Tonight we're up close with Havana-born infielder Mike de la Hoz. As you might have guessed, his name is Spanish for "Mike of the Hoz". Or not. My Spanish is a tad rusty. (It's actually "of the sickle".)

Signed by the Indians in 1958, Mike hit at nearly every stop, earning his way onto a major league roster by his third professional season. He was a true utility player, totaling 129 career games at third base, 119 at second base, and 108 at shortstop. The Cuban import never exceeded 81 games or 200 at-bats in any year, and 40% of his career appearances were in a pinch-hit capacity. After four seasons in Cleveland, he joined a talented Braves team that included Hank Aaron, Eddie Mathews, and Joe Torre. 1964 was his best year, as he hit .291 with a .346 on-base percentage. In total, Mike also spent four years as a Brave, which would be the balance of his career except for one at-bat with the Reds in 1969. In an eight-year career, he hit .251 with 25 home runs.

Fun fact: July 8, 1965 was a banner day for de la Hoz. Pinch hitting to lead off the eighth inning, he homered off of Dave Giusti of the Astros to bring the Braves to within 6-5. He remained in the game, but Houston scored two insurance runs in their half of the inning. Milwaukee fought back to within one run, setting the stage for Mike to tie the game at 8 with a two-out single in the ninth. The game ground on into the twelfth inning, at which point he led off with a single, advanced to second base on Felipe Alou's bunt, and scored the winning run on Frank Bolling's single! 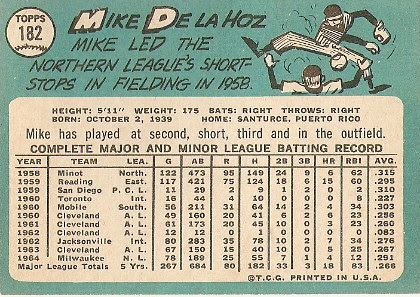