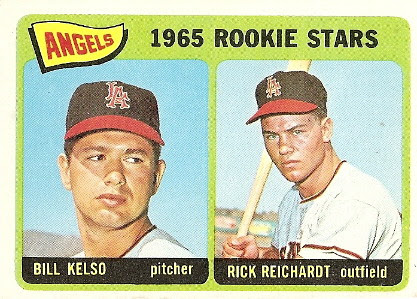 The Angels batted .500 with this pair of prospects. Pitcher Bill Kelso was gone in three years, but outfielder Rick Reichardt became a power threat throughout the 1960s. There's not much to say about their photos, so I'll add that I like the dark wordmarks and piping with the red accents. It's a good look that the Angels briefly brought back in the mid-1990s. They would do well to revisit that style; I think their current unis are much too red.

After graduating from Whitworth College, a Presbyterian liberal arts college in Spokane, WA, Kelso signed with the Dodgers as a catcher. After a few seasons, he switched to the mound and switched L.A. teams, as the Angels claimed him in the Rule V draft. He showed promise in a summer 1964 callup, going 2-0 with a 2.28 ERA and shutting out the Twins in his only start. Despite the impressive debut, Bill didn't return to the majors until September 1966. Again he performed well, posting a 2.38 ERA in eleven and one-third innings of relief. The Halos finally gave him an honest shot the following year, and he responded. His 69 games pitched (all but one out of the bullpen) ranked third in the American League, and he went 5-3 with 11 saves and a 2.97 ERA. He was stingy with the longball, allowing six home runs in 112 innings. The Angels sold high, trading the righty to acquire former 22-game winner Sammy Ellis from the Reds. Kelso lasted only one season in Cincinnati, closing out his big league career with a 4.00 ERA in 35 games.

Fun fact: Seven of the sixteen home runs that Kelso allowed in his career were hit by Hall of Famers.

Rick Reichardt was the ultimate bonus baby, a handsome, strapping two-sport athlete at the University of Wisconsin. Eighteen major league teams vied for his service, and the $200,000 bonus that brought him to the Angels was the final straw in the push for an amateur draft. After brief exposures to the majors in both 1964 and 1965, he had a much-anticipated breakout year in 1966. In just 89 games, he hit .288 with 16 home runs and received minor consideration in the MVP vote. Unfortunately, his season was interrupted in July by an ailment that led to the removal of one of his kidneys. It's been suggested that this illness had a longer-lasting impact; Rick himself said that he "never had the resiliency after that". But in a pitching-first era, the young outfielder was still above average. He hit 17 home runs in 1967, and led the Angels with 21 longballs and 73 RBI the following year. Even his .255 average was 25 points above the overall league mark. His 13 homers and 68 runs driven in 1969 were also tops on the team.

In early 1970, the Angels ended their six-year association with Reichardt, trading him to the Senators with young infielder Aurelio Rodriguez in exchange for third baseman Ken McMullen. With more powerful hitters around him, such as Mike Epstein and Frank Howard, Rick didn't have the pressure of being the go-to guy, but his numbers stayed about the same (.253, 15 HR). After only one season in D.C., he was dealt to the White Sox. His first year in the Windy City was one of the best of his career (.278-19-62), but it was also his final season as a regular. He finished up with another year and a half in Chicago and a partial season in Kansas City. The Royals released him after one at-bat in April 1974. In parts of ten seasons, Reichardt hit .261 with 116 home runs.

In the thirty-five years since his retirement, Rick has worked in financial consulting, coached college baseball at the University of Wisconsin and the University of Florida, and at present works with Roland Hemond (special assistant to the president of the Arizona Diamondbacks) to counsel players about their education options.

Fun fact: With Walt Disney and Ronald Reagan in attendance, Rick hit the first-ever home run at Anaheim Stadium, a solo shot off of Tommy John. 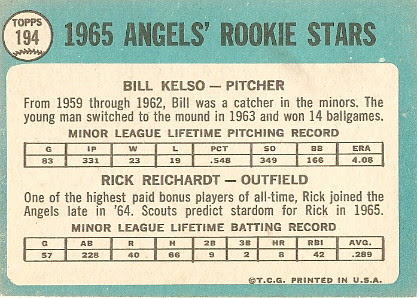