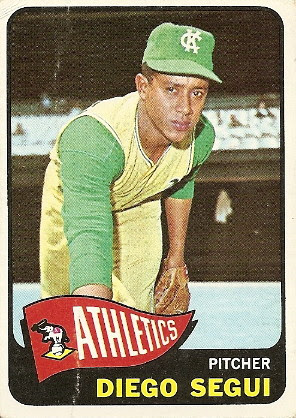 I'm not sure what Diego Segui is doing with his right hand, and I don't think I want to know. Since this is a family blog, we'll just go ahead and say that he's trying to hang that red Athletics pennant. Yeah, that's the ticket.

Today I'm implementing a change in format. I never expected to have to play catchup with dozens of cards. Within a few months, my 1965 Topps card intake became a deluge rather than a trickle. I'm already working full-time and updating my other blog daily, and trying to find time to keep my website current. The posts on this blog are pretty time-consuming, most of them taking me a few hours to complete. I just feel like I'm always short on time, and something has to give. It's a good problem to have, because it means that this project is an ongoing success (we're at a whopping 42% complete). I'll still be offering fun biographical facts and statistics about each player, but I'll be posting them in list form. The longer posts are getting monotonous to write, as the largest part of them is just a recitation of year-by-year stat lines. If there's any kind of great outcry, I may reconsider, but this seems like a clean solution for the time being. I hope you'll keep reading.

-Among Cuban natives, ranks seventh all-time in wins in the majors leagues with 92. Luis Tiant leads the way with 229.

-Held the distinction of starting the first game in franchise history for both the Seattle Pilots (1969) and the Seattle Mariners (1977). Was the only player to appear in games for both Seattle franchises.

-Turned forty years old in 1977, earning him the moniker of "the Ancient Mariner".

-From the "Minor League Baseball Ain't So Bad" Department: Segui spent two seasons pitching for the Hawaii Islanders of the Pacific Coast League (1961 and 1976).

-Baseball is the family business for the Seguis. Diego's brother Dario and son Dan played minor league ball, and his older son David was a first baseman in the majors from 1990 through 2004. 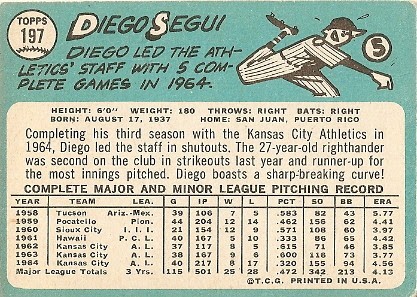