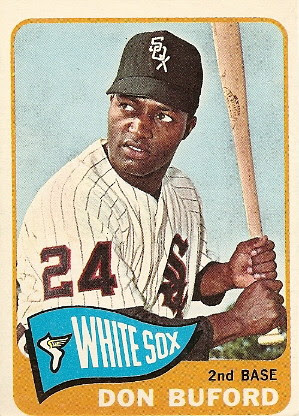 This is one of the cards in the 1965 Topps set that I've wanted for a while. As an Orioles collector, I have plenty of vintage cards of "Buf" in orange and black, but I didn't have any from his White Sox days. It's a great looking card, too. You can tell that Don probably spent hours in front of his hotel room mirror practicing that icy stare. I also like the big block TV number on full display, accented in red. These fun facts are a bit longer than the past few I've done. Don had an especially fascinating career, and I'm probably guilty of being a bit of a homer!
Fun facts about Don Buford:

-Played college baseball and football at the University of Southern California. Other notable USC baseball alums include Fred Lynn, Tom Seaver, Mark McGwire, and Randy Johnson. In 2001, he was named to the USC Athletic Hall of Fame.
-Was named the International League MVP in 1963, when he led the league in hitting (.336), hits (206), runs (114), and steals (42) with the Indianapolis Indians, who would go on to win the Governors' Cup as the best team in AAA. Don was named to the IL Hall of Fame in 2008.

-In 1966, Buford stole 51 bases, trailing league leader Bert Campaneris by just one. However, he was not a precision thief, with just a 65.6% success rate for his career (200 SB, 105 CS).
-In November of 1967, Chicago reacquired Hall of Fame shortstop Luis Aparicio from the Orioles in a six-player deal that sent Buford to Baltimore.
-Don played for three consecutive American League champions in Charm City (1969-1971), and scored exactly 99 runs in each of those seasons. His runs total led the league in 1971.
-He was a very patient hitter, drawing a whopping 109 walks against 55 strikeouts in 1970. For his career, he walked 672 times while whiffing only 575 times.

-His only All-Star season was 1971, when he set career highs in home runs (19),on-base percentage (.413), and slugging percentage (.477).
-In postseason play, Buford swung a big stick, clubbing five home runs in 22 games and going deep at least once in each of three World Series. He also got on base at a .363 clip in ALCS and World Series play.

-Don was the first Oriole to homer from both sides of the plate in a single game, accomplishing the feat on April 9, 1970 against the Indians.
-If it was tough to strike Buford out, it was even harder to double him up. He hit into just 34 double plays in 4,553 career at-bats, or once every 138 trips to the plate. That's a major league record; his career total of GIDP is two less than Jim Rice's single-season record of 36!

-After slumping to .206 in 1972, Don went Far East. He finished his career with a four-year stint in Japan, batting .270 with 65 home runs with the Nankai Hawks.
-He's spent most of the past few decades coaching, including serving under ex-teammate Frank Robinson with three major league clubs (Giants, Orioles, and Nationals). He's also managed in the Orioles and Cubs farm systems. In 2004, he helmed the New York-Penn League's Aberdeen IronBirds. FYI, I joined the team as an intern late that season, but never did cross paths with him. 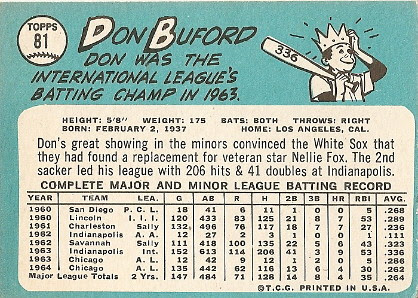