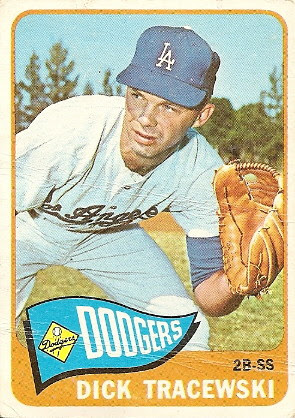 Minor league veteran Dick Tracewski appears to have been banished to the farthest field in the Dodgertown complex at Vero Beach. The dense forest looms in the background, and based on the apprehensive look on Dick's face, I don't think he's preparing to field a bad-hop grounder. My guess is that he's using his infielders' glove to ward off an onrushing Sasquatch. It's not worth it, Dick! Run! Run for freedom!

The pride and joy of Enyon, Pennsylvania, Dick Tracewski signed with the Dodgers fresh out of high school. The year was 1953, and his labyrinthine path to the majors was just beginning. As the blurb on the back of his card states, the infielder played for twelve different minor league clubs in the decade prior to his major league debut. It's funny that his .298 average and 14 triples for the 1957 Pueblo Dodgers are mentioned as a springboard to the bigs, considering that they came a full five years before he landed in L.A. To be fair, he did lose two subsequent seasons to military service.

Though he had to wait until he was 27 to play in Dodger Stadium, Dick did have the thrill of playing for two World Series winners in his four seasons in blue. He also hit .154 and .118 in the 1963 and 1965 Fall Classics, but who's counting? He split time amongst three infield positions (second and third base and shortstop), topping out at 106 games and 304 at-bats in 1964. He compensated for a lackluster bat with an able glove and strong throwing arm, and evidently the Tigers were impressed enough with his versatility to give up former 15-game winner Phil Regan in order to obtain him.

The trade was a steal for the Dodgers, as Regan went 14-1 with a 1.62 ERA in 1966, his first season with the team. Conversely, Tracewski hit below .200 in three of his four seasons in Detroit (the exception being a .280 mark in 107 at-bats in 1967). But the utilityman again made the most of his situation, as he played for yet another World Champion in 1968! The Tigers wisely limited him to two appearances in the Series: a defensive substitution late in Game 1 and a pinch-running cameo in Game 7. He scored an insurance run in a 4-1 win. Dick retired a year later with three World Series rings in an eight-year career, an unlikely outcome for a career .213 hitter with a gap of a decade between his initial signing and his MLB debut.

Apparently, Tracewski liked Detroit so much that he stayed around for a few more decades. After managing in their farm system in 1970 and 1971, he spent a team-record 24 seasons as a Tigers coach. He had two stints as interim manager, going 2-0 in 1979 prior to Sparky Anderson's arrival and filling in for Anderson for several weeks in 1989 while the skipper recovered from a bout of exhaustion.

Fun fact: On April 28, 1964, Dick went 3-for-4 with two triples in the Dodgers' 3-1 win over Houston. He scored the go-ahead run in the eighth inning, and was caught stealing home in the ninth! 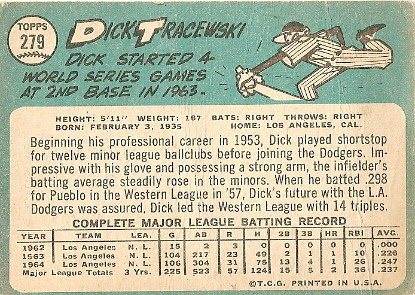