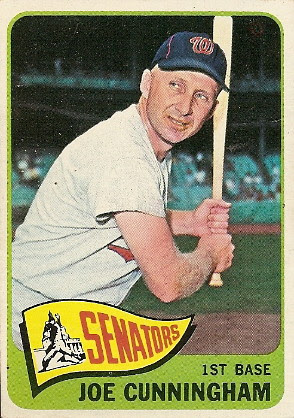 I can't believe I haven't mentioned this yet, but the color choices for some of these cards are downright bizarre. Sickly green for the Senators? Bright pink for the Yankees? At least my Orioles look sharp in their gray and orange. By the way, this is the last card from a batch that was sent by reader Max. Don't worry, he'll be reappearing soon!

Paterson, New Jersey-born Joe Cunningham was signed by the Cardinals in 1949. He had a gradual path to the majors, debuting in 1954 at age 22. But once he got there, he immediately set a record by homering three times in his first two games (once off of Art Fowler in his first game and twice off of Warren Spahn the following day). He played 85 games as a rookie, hitting .284 with a strong .375 on-base percentage, 11 home runs, and 50 RBI. But he was blocked at first base by Stan Musial, who was being transitioned from the outfield. So despite Joe's rookie exploits, he was trapped in the minors for all of 1955 and most of 1956. He finally made it back in 1957, though he still had to fight for innings at first base and in right field. But fight he did, to the tune of a .318 AVG and .439 OBP. He earned more playing time the following season, and responded with a .312/.449/.496 line and career-high 12 home runs (as you can see, Joe was more of a line drive hitter). But he was just warming up.

Playing full-time in 1959 (mostly as an outfielder), Cunningham had a career year, with a .345 average that was bested only by Hank Aaron's .355 mark. His league-best .453 on-base percentage blew away Aaron's second-place .401. He was selected to both All-Star Games that summer. His production dipped over the subsequent two seasons, though he was still a league-average hitter. In November of 1961, the Cardinals traded the 30-year-old to the White Sox for Minnie Minoso.

Finally allowed to take his place as a full-time first baseman, Joe was rejuvenated, hitting .295 with personal bests in several offensive categories: runs (91), doubles (32), triples (7), and RBI (70). He also received raves for his defense, as he led his A.L. peers with a .994 fielding percentage. Unfortunately, his second season in the Windy City was abbreviated by a fractured collarbone suffered in a nasty collision at first base with Charlie Dees of the Angels. The accident occurred on June 3, and Cunningham was out until Labor Day. He did hit .383 upon his return, but it was something of a last hurrah. The first baseman played just 197 more games in parts of three seasons with the White Sox and Senators, hitting .228 in that span. He retired in 1966 with a .291 career average and .403 on-base percentage in parts of twelve seasons.

Joe returned to the Cardinals after his playing days came to an end, managing in their farm system, working in sales in the front office, and coaching for the big league club in 1982. His son, Joe III, played five seasons in the St. Louis organization and has been a minor league coach and manager for the past two decades.

Fun fact: After hitting two home runs off of Warren Spahn in his second career game, Joe would go deep twice in a single game once more in 1,141 career games. 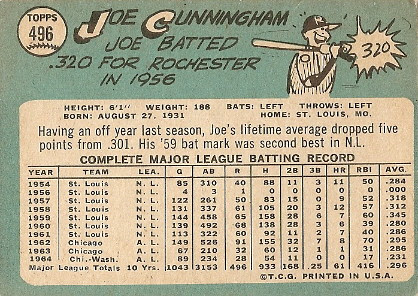