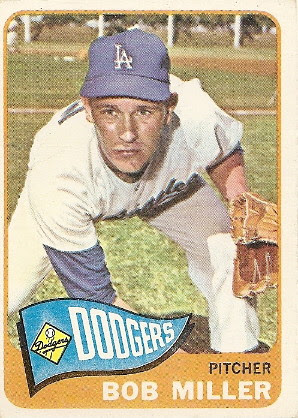 Bob Miller is one of four pitchers named Miller in the 1965 Topps set. The others are Orioles rookie John, Bob's Dodger teammate Larry, and John Miller's Oriole contemporary Stu. There are no position players with the surname Miller in the set. Very curious.

-That's not his real name. He was born Robert Lane Gemeinweiser, which I suppose doesn't roll trippingly off of the tongue.

-Was versatile, starting 99 games and finishing 290 among 694 career appearances. Former teammate Roy Hartsfield dubbed him "The Christian" because he suffered for the sake of the pitching staff, pitching some tough innings when he was sore to spare other banged-up relievers.

-Bob had the misfortune of pitching for the 1962 Mets, where he tied a major league record by losing his first dozen decisions on the way to a 1-12 record. That record was later broken by another Met moundsman, Anthony Young.

-Did not pitch in the 1963 World Series win, but turned in three scoreless appearances for the Dodgers in the 1965 and 1966 World Series (a win and a loss, respectively). Also pitched on the winning end of a Fall Classic for the 1971 Pirates, though he was not personally impressive (0-1, 3.86).

-Redefined the term journeyman, playing for ten different teams and tying another since-broken record. Three times in four years he pitched for three teams in a single season: Indians/White Sox/Cubs in 1970, Cubs/Padres/Pirates in 1971, and Padres/Tigers/Mets in 1973.

-Miller was the first-ever pitching coach for the Toronto Blue Jays (1977-1979), and coached for the Giants in 1985. Later worked as an advance scout for San Francisco.

-Another not-so-fun fact: Bob died due to injuries suffered in a car collision in Rancho Bernardino, CA in 1993. He was 54 years old. 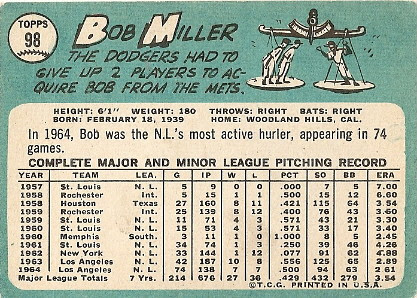