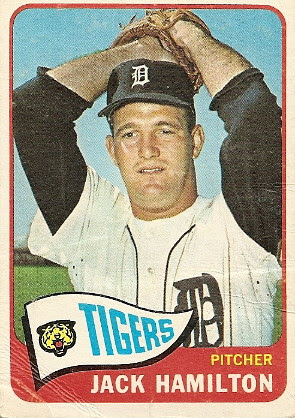 Pitcher Jack Hamilton was the unwitting instigator of one of the most tragic on-field scenes in baseball history when he beaned Tony Conigliaro in 1967. Prior to that event, he was best known as a pitcher who struggled with his control, but had shown signs of effectiveness as a reliever.

Born and raised in Burlington, Iowa, the righthanded Hamilton was signed by the Cardinals in 1957. Though he no-hit the Kingsport Orioles in his first pro season, he often had trouble spotting his pitches, twice leading his minor league in walks. He lingered in the St. Louis system for four years before being drafted by the Phillies. One year later, he was in the major leagues.

As a rookie in 1962, Jack went 9-13, but led the National League in walks and wild pitches and put up a 5.09 ERA. Over the next three years, he bounced between the majors and minors with the Phils and Tigers, with poor results in the bigs. The Mets gave the righty a shot in 1966, and he became a valuable swingman. He won six games and saved thirteen with a 3.93 ERA (though again he was top five in walks and wild pitches). The following season was the greatest of his career, performance-wise. Beginning as a reliever in New York and moving on to start for the Angels, Jack went 11-6 with a 3.35 ERA. But one bad pitch would write the story for his entire body of work.

On August 18 in Fenway Park, young Red Sox slugger Tony Conigliaro stepped to the plate and dug in, crowding the plate. Jack let a fastball fly, and it went off course. Tony was unable to move quickly, and the ball hit him squarely on the cheek. Blood spilled from every opening of the hitter's head as he dropped to the ground. Conigliaro suffered a fractured cheekbone, a dislocated jaw, and a cyst behind his left eye. He was lucky to survive, but he missed the next year and a half due to blurred vision. Though Tony courageously returned in 1969, he was never the same.

As for Hamilton, he lasted only two more seasons himself, retiring with a 4.53 ERA. He now owns a restaurant in Branson, Missouri and tends to avoid talking about the pitch that he still maintains was an accident. You can read more about Jack, Tony C, and the beaning here.

Fun fact: On May 20, 1967, Jack hit his only career home run, a grand slam off of Al Jackson of the Cardinals. He couldn't stick around to enjoy it, leaving after three innings in an eventual 11-9 loss. 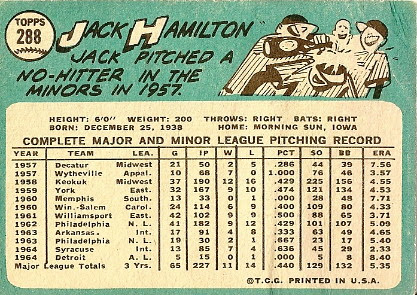