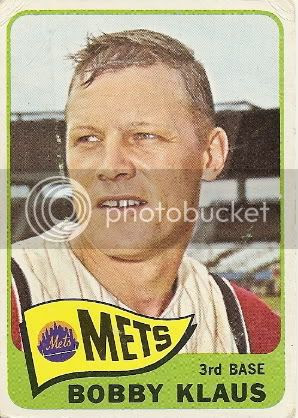 So much for our respite from the hatless. I have several cards of Bobby's brother Billy, a former Oriole. Those suave good looks run in the family, let me tell you.

-A native of Spring Grove, IL, Bobby attended the University of Illinois before signing with Cincinnati in 1959.

-He finally reached the big leagues in his sixth pro season but struggled, managing just 17 hits in 93 at-bats with the Reds for a .183 average.

-The Mets purchased his contract in July 1964 and the second half of his rookie season was less rocky. Receiving more regular playing time all around the infield, he hit .244 in 56 games with New York to bring his cumulative average to .225.

-His moment in the sun was a walk-off home run on April 15, 1965, as he took Claude Raymond deep in the bottom of the tenth inning to defeat the Astros 5-4.

-The following February, he was traded to the Phillies. He spent all of the next three seasons at AAA San Diego, where he had previously played in 1962-1963 (it was a Reds affiliate back then). Ironically, he was then drafted by the new National League franchise in...San Diego, but flipped to the Pirates months later. An unsuccessful 1969 season with Pittsburgh's AAA Columbus club spelled the end of his baseball career at age 31.

-As previously mentioned, his older brother was Billy Klaus, an infielder for the Braves, Red Sox, Orioles, Senators, and Phillies (1952-1963). He was the runner-up to Herb Score in Rookie of the Year balloting in 1955. 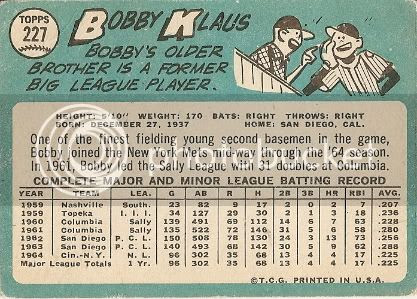