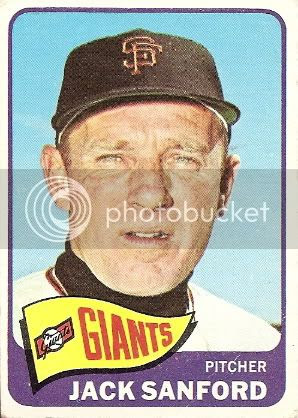 In case you're keeping score, this is the seventh card in a sequence, all sent as part of the huge contribution by Jamie Whyte. There's one more to come, which means that I knocked #222-229 off of my checklist all at once!
Fun facts about Jack Sanford:

-Born in Wellesley Hills, MA, Jack was signed by the Phillies as a teenager in 1948.
-Jack's ascent to the major leagues was slowed by a year-plus spent in military service. He also struggled with his control, as it pertained to both pitching mechanics and his temper. In 1954, he was suspended for ten games after refusing to give the ball to his manager as he was being removed from a game.

-He finally debuted with the Phillies at age 27 in 1956, winning his first career start on September 16 by pitching around eight walks, four hits, and a hit batter!
-Sanford was an All-Star and the runaway choice for Rookie of the Year in 1957, as he went 19-8 with a 3.08 ERA and 15 complete games. He led the National League with 188 strikeouts and a hits-per-nine-innings ratio of 7.4.

-He shined in the World Series, shutting out the Yankees on three hits in Game Two before pitching into the eighth in a 5-3 loss in Game Five. He returned in the decisive seventh game and lost a heartbreaker, surrendering the lone run that made the difference in the fifth inning. His earned run average for the Series was 1.93.
-A league-leading 42 starts totaling 284.1 innings in 1963 may have been the root of arm troubles for the righty. He moved to the bullpen after that season, toiling for the Giants, Angels, and Athletics over the next four years. 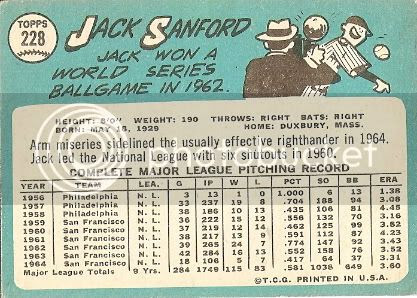