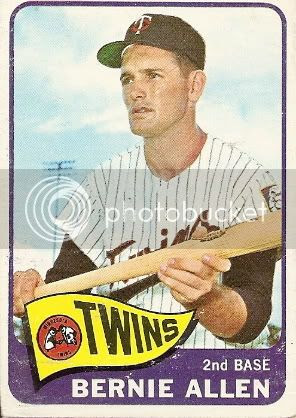 -Born in East Liverpool, OH, Bernie was a two-sport athlete at Purdue University, where he also played quarterback.

-He signed with the Twins in 1961 and played only 80 games in the minors before jumping to the big leagues the following year.

-As a rookie second baseman, Allen played in all but three of the team's games and set offensive marks that he would not surpass for the rest of his career: a .269 average, 12 home runs, 64 RBI, and 27 doubles. He was named to the Topps All-Star Rookie team.

-The dreaded sophomore slump struck in 1963, as he carried a .198 average in mid-August before heating up over the final weeks of the season to end the year at .240.

-A takeout slide by Don Zimmer in June 1964 tore the anterior cruciate ligament in Bernie's knee. A team-sponsored doctor misdiagnosed him, claiming that he did not need surgery.

-The infielder sought out a surgeon at his own expense and had the knee repaired, even though the ligament had shriveled in the ensuing months since the injury.

-Despite worries that his career was over, Allen did return to play 767 games over the next nine seasons. He was not quite the same player, hitting above .250 only once.

-He currently lives in Carmel, IN. 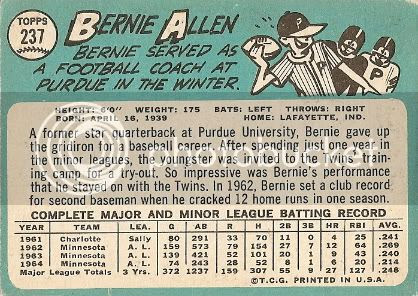