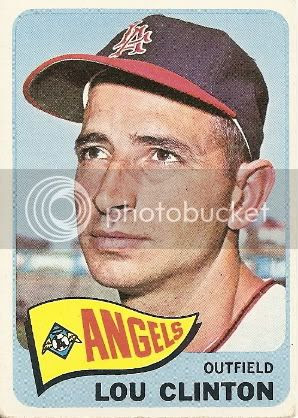 -Started regularly in right field for Boston in 1960, his rookie season, but hit only .228.

-On August 9, 1960, he gave an unfortunate assist to a home run by Cleveland's Vic Power. The ball hit off the top of the fence and caromed back to Lou, who inadvertently kicked it over the wall before it touched the ground!

-July 13, 1962 was a day to remember for Lou. He hit for the cycle against the Athletics and went 5-7 with a walk, four runs scored, and four RBI, culminating in a game-winning RBI single in the 15th inning! Although the teams played six extra innings, he didn't need them - he clinched the cycle with a single in the ninth.

-His production dropped along with his batting average the following season, and he was traded to the Angels. He stayed in L.A. for little over a year before being selected on waivers by the A's. He played a single game in Kansas City before the waiver claim was voided and he was returned to the Angels. The Indians then put in a waiver claim for him, and he lasted a full dozen games in Cleveland before being traded the following January. Makes your head spin.

-Clinton hit .220 as a reserve for the Yankees in 1966, and appeared in six games the following year before finishing his pro career at AAA San Diego. He hit .247 in parts of eight big league seasons with 65 home runs and 269 RBI.

-He moved to Wichita, KS after his retirement and owned and operated a business called Clinton Productions Corp. 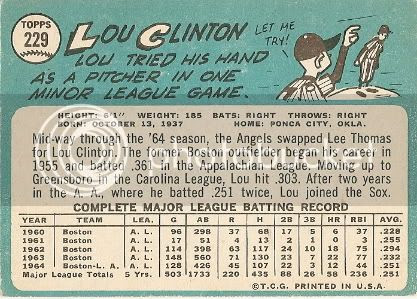