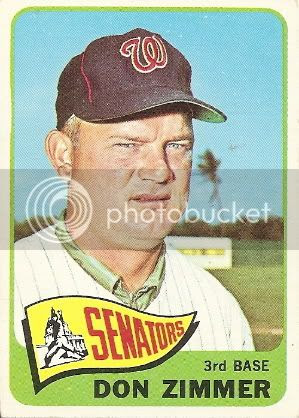 ZIM! This is a much more fresh-faced Don Zimmer than most baseball fans are accustomed to seeing. You can even make out his eyes.

-A native Cincinnatian, Don signed with the Dodgers at age 18 in 1949.

-Nicknamed "Popeye" for his resemblance to the cartoon sailor, Zimmer suffered serious beanings in 1953 and 1956. The former resulted in holes being drilled in his skull to relieve swelling, and they were later filled with metal "buttons". This led to a false rumor that he had a steel plate in his head.

-Don broke in with Brooklyn in 1953 and was a part-timer on some very talented Dodger teams over his first four seasons. He hit 15 home runs in only 280 at-bats for the 1955 World Champs.

-He was a member of the inaugural 1962 Mets. Though he played just 14 games for them, he set the tone for their hapless season by committing an error on their first play and collecting four hits in 52 at-bats (.077).

-Short stints with the Reds and Dodgers (again) were followed by a two-year run in Washington to bring his twelve-year career to a close. He hit .235 with 91 home runs and 352 RBI.

-After spending a year playing in Japan and four years as a minor league manager, he became a major league coach with the Expos in 1971. Over the next three decades, he would also coach the Padres, Red Sox, Yankees, Cubs, Giants, and Rockies.

-Zimmer also had some good years as a manager, though he gained a reputation for coming up just short. After a tough two years in San Diego, he had three straight 90-plus-win seasons in Boston but was criticized for presiding over the team's infamous 1978 collapse (Pitcher Bill Lee called him "the Gerbil"). He didn't last long in Texas, and three-plus seasons with the Cubs (1988-1991) were notable for an NL East championship in 1989 that earned Zim a Manager of the Year award; Chicago was dispatched in the NLCS by the Giants in five games. Currently, Don is a special advisor for the Tampa Bay Rays. 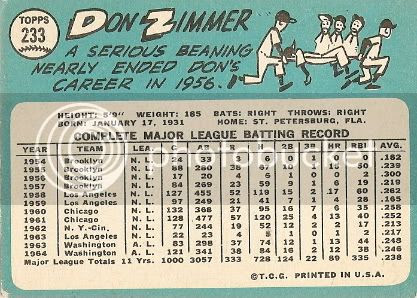