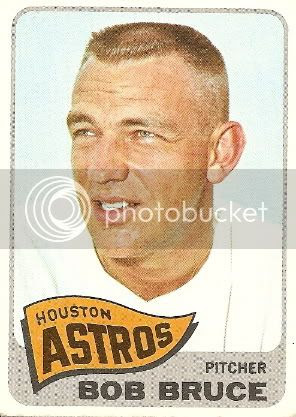 Man, there is really nothing going on visually with these Astros cards. They're killing me.

-Born in Detroit, Bob signed with the hometown Tigers in 1953 at age 20.
-It took seven years for him to break into the majors; only after leading the AAA American Association with 177 strikeouts did he finally get the call in 1959.

-Bruce pitched well enough as a rookie for Detroit, compiling a 3.74 ERA in 34 games between the rotation and bullpen. But he saw action in only 14 games the following year, and was traded to the expansion Houston club after that season.
-Spending most of 1962 in the Colt .45s rotation, Bob posted a winning record (10-9) with a 4.06 ERA and six complete games. He tied for the team lead in victories.

-On April 19, 1964, he became the 12th pitcher in major league history to strike out all three batters in an inning on nine total pitches, doing so in the eighth inning against the Cardinals. He also struck out the side in the ninth, giving him two shutout innings of relief with all six outs coming via the K.
-The 1964 season was the greatest of his career, as he won 15 games, lost nine and posted a 2.76 ERA and nine complete games. He shut out his opponents four times, thrice by the score of 1-0. This included a two-hitter against the Mets and a 12-inning five-hitter against the Dodgers in his final two starts!

-The aforementioned gem against Los Angeles was the final game in Houston's Colt Stadium. Bob also broke in the new Astrodome the following year with a hard-luck 2-0 loss.
-Despite a decent 3.72 ERA, Bruce's record cratered to 9-18 in 1965. He went 3-13 the following year, his ERA jumping by a run and a half to hasten the end of his career.

-After a dozen games with the Braves in 1967, Bob called it a career. In parts of nine seasons he was 49-71 with a 3.85 ERA.
-At last check, he was living in San Antonio, TX and had spent his post-baseball years in real estate development and residential sales. 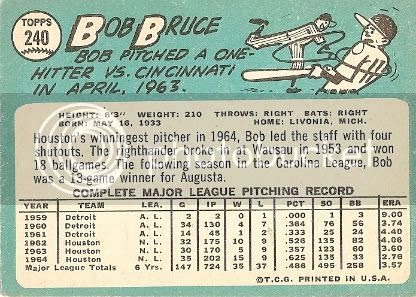