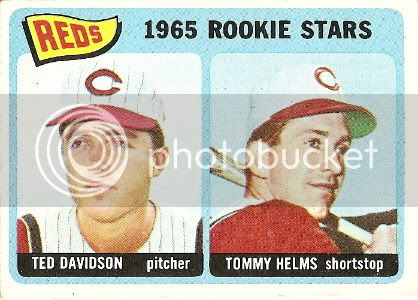 Here's a little math problem as I post my first card in a week: work conference + home renovations = less time for blogging. Fortunately you gentle readers are a kind lot and have not been sending me irate emails and comments demanding more frequent updates. As a token of my gratitude, here's a two-for-one Reds rookie card! In case you've lost track, this was part of a ginormous lot of set needs that were sent to me by Jamie Whyte. Thanks again, Jamie!
Fun facts about Ted Davidson:

-He joined the Reds in July of 1965 and got his first major league win in his third appearance. Cincy starter Joey Jay was knocked out of the box after facing seven batters in the first inning, and Davidson entered with his team trailing 3-0. He went the distance, allowing a single run, and the offense rallied to a 6-4 victory.
-Ted was a valuable member of the bullpen as a rookie, posting a 2.23 ERA and a 1.08 WHIP in 24 games.

-As one of three pitchers on the 1966 Reds to appear in fifty games, he put up a 3.90 ERA, won five games, and saved four.
-The southpaw's career was likely shortened by a bizarre and frightening incident in March 1967. He and his estranged wife Mary Ruth got into a heated argument at a bar in Tampa and she shot him three times (twice in the right chest and once in the left abdomen) with a .22 caliber pistol. He was rushed to the hospital for emergency surgery and was lucky to have survived.

-It was remarkable that Ted pitched again at all, much less in the same year. He appeared in nine games for Cincinnati in 1967, and then split 1968 between the Reds and Braves. His best days were apparently behind him, as he allowed 20 runs in 28.1 innings with the two clubs.
-Davidson spent the 1969 season bouncing around AAA for the Cubs, White Sox, and Indians before calling it a career. In parts of four major league seasons he was 11-7 with five saves and a 3.69 ERA.

-He likely hated to face Dick Allen. The mercurial slugger touched him up for four home runs and eight RBI in just 14 plate appearances for a 1.571 OPS!
-He was 66 years old when he passed away in 2006 in Bullhead City, AZ.

Fun facts about Tommy Helms:
-A native of Charlotte, NC, Tommy signed with the Reds in 1959 at age 18.

-Cracking the Reds starting lineup at third base in 1966, Helms was named N.L. Rookie of the Year. He batted .284 with nine homers and 49 RBI. His home runs and runs scored (72) were both career highs.

-After being switched to second base, he had back-to-back All-Star appearances in 1967 and 1968, starting the latter game.

-Hit the Reds' first homer following their move to Riverfront Stadium on July 1, 1970.

-Was traded to the Astros in a late 1971 blockbuster eight-player deal that is most notable for bringing Joe Morgan to Cincinnati.

-Was notoriously difficult to strike out, fanning only 301 times in 5,333 career trips to the plate.

-He co-owned a vending machine company with fellow ex-Red Pete Whisenant. Tommy also coached for the Rangers in 1981 and 1982, and rejoined the Reds as a coach from 1983-1989. He served two terms as the team's interim manager, taking over during Pete Rose's suspension in 1988 and following Rose's banishment from baseball the following year. His teams won 28 games and lost 36. Later, Helms managed in the minor leagues for the Cubs' AA Charlotte affiliate (1990) and for the independent Atlantic City Surf (2000-2001). 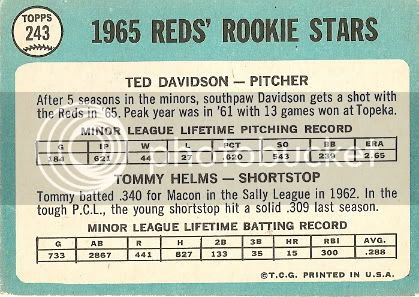