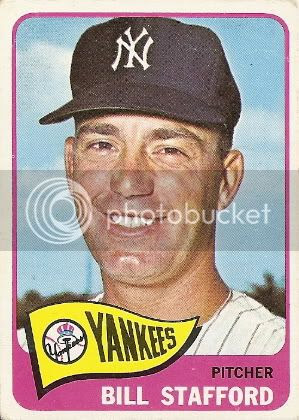 Has there ever been an uglier color combination on a card than the hot pink/yellow abomination that Topps saddled the Yankees and Pirates with in 1965? Well, yes. After all, the 1990s happened. But man, are these cards hard on the eyes.

-A native of Catskill, NY, Bill signed with the Yankees in 1957 as a teenager. His wife later claimed that he chose them over the Dodgers because they offered him a pair of spikes!

-Fashioned a 2.06 ERA at AAA Richmond in 1960, earning himself a callup to the majors just after his 21st birthday.

-Shut out Kansas City in his fourth career start, four-hitting the A's and striking out seven to earn a 1-0 victory.

-Posted identical 14-9 records in his first two full seasons (1961 and 1962), though the former was really a much better year; his 2.68 ERA ranked second in the league behind Dick Donovan.

-Pitched in the World Series in each of his first three years in New York, posting a 2.08 ERA in a pair of starts and a pair of relief appearances. Took a two-hit shutout into the ninth inning against the Giants in Game Three of the 1962 Fall Classic, but settled for a four-hit, 3-2 complete game win.

-Pitching in 45-degree weather in April of 1963, Bill injured his arm. He slumped to a 6.02 ERA, and his career was likely shortened.

-After another abbreviated season in 1965, the Yankees dealt Bill to the Athletics. He appeared in only 23 games for K.C. over two seasons, ending his major league career in 1967. He stuck around in AAA for two more years before walking away from the game. In parts of eight seasons he was 43-40 with a 3.52 ERA and nine saves.

-In his career, he held Hall of Famer Harmon Killebrew to ten hits in 47 at-bats (.213) with three home runs. A couple of other Cooperstown enshrinees, Luis Aparicio and Nellie Fox, hit .227 and .219 off of Stafford. 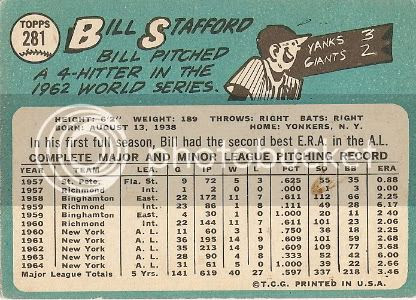