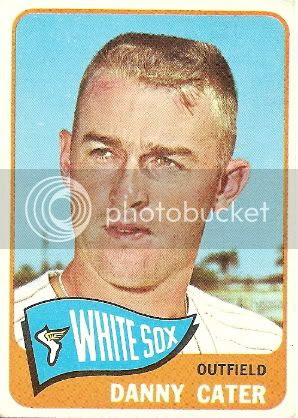 I see the name Danny Cater and I think of cartoon critter Wally Gator. "See you later, Danny Cater!" Hmm...it's a good thing John Sterling wasn't around to deliver home run calls for him.
Fun facts about Danny Cater:

-Hailing from Austin, TX, Danny signed with the Phillies in 1958 fresh out of high school.
-He was named the Appalachian League MVP in his first pro season, as he hit .345 and slugged .586 with Johnson City.

-Hit for average and power at each minor league stop, and made the big league club in 1964. He made only 160 trips to the plate in 60 games, but did hit .296 with 45 runs scored.
-Traded to the White Sox, Danny was a starter in his sophomore season and hit .270 with a career-best 14 home runs.

-He was dealt again the following year, going to the Athletics in a midseason deal. He spent three-plus seasons with that club, including a memorable 1968 campaign in which he finished second in the American League with a .290 average. It was a notoriously poor year for hitters, as the entire A.L. hit .230 overall and only batting champ Carl Yastrzemski (.301) topped .300.
-Speaking of batting average, pitcher and author Jim Bouton claimed in Ball Four that Cater had the ability to figure out his "on his way down to first base".

-Danny followed his stint in Oakland with two years in the Bronx, hitting a career-best .301 with 76 RBI for the 1970 Yankee squad that finished runner-up to the A.L. East champion Orioles.
-Traded to Boston for pitcher Sparky Lyle in a deal that had major benefits for the Yankees, Cater was just a part-time player for the Red Sox for three seasons before winding down his career with a 22-game swing through St. Louis in 1975. 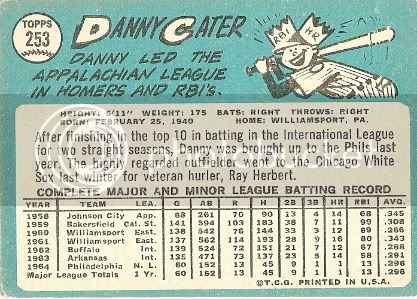