Look, it's Billy Herman! If we were playing Jeopardy and there was a "Before and After" category, you could combine him with another manager in this set: Billy Herman Franks.

-Born William Jennings Bryan Herman (yes, really) in New Albany, IN, he was purchased by the Cubs from Louisville of the American Association in 1931.

-He appeared in four World Series (three with the Cubs and one with the Dodgers), and his team lost all of them. He did stand out in the 1935 Fall Classic, hitting .333 (8-for-24) and slugging .625 with a home run and six RBI against the Tigers.

-Served in the Navy for two years during World War II before finishing his career with two abbreviated seasons as a Dodger, Brave, and Pirate.

-Coached for the Dodgers, Braves, Red Sox, Angels, and Padres in the decades following his retirement. 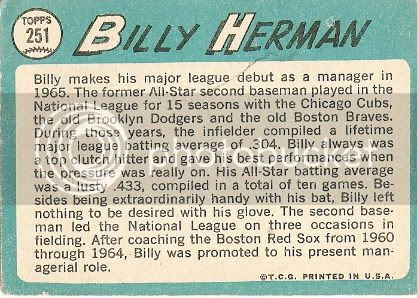