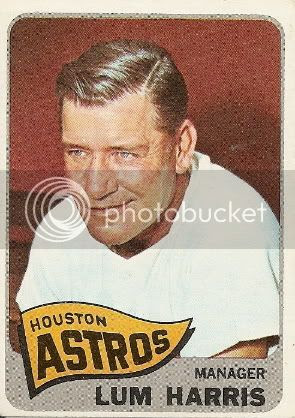 It's not often that you see a hatless manager card. Blame it on the Colt .45s-Astros changeover. If you're curious, "Lum" is short for "Luman", which I believe is pronounced "Lou-mon". His birth name is actually Chalmer Luman Harris, which probably caused some teasing in his school days.
Fun facts about Lum Harris:

-Born in New Castle, AL, Lum began pitching professionally in 1937 in independent ball.
-While with the Atlanta Crackers, he formed a battery with catcher Paul Richards. The two would be closely aligned for decades afterward.

-He was traded to the Athletics and made his major league debut in 1941. Lum pitched for the team for five seasons, during which time they were perennial cellar-dwellers. He led the American League with 21 losses (and only seven wins) in 1943.
-Following his best big league effort (10-9, 3.30 ERA, and an A.L.-best 1.3 BB/9 IP in 1944), he missed a season while serving in the Navy.

-Lum finished his career in 1947 with a brief stint in Washington. In five-plus seasons, he was 35-63 with a 4.16 ERA.
-When Paul Richards became manager of the White Sox in 1951, he hired Harris as one of his coaches. They stayed in those respective positions through 1954, then both jumped to Baltimore and stayed there until 1961.

-Near the end of the 1961 season, Richards resigned as manager of the Orioles to take the general manager position in Houston. Lum managed the O's throughout September, winning 17 games and losing 10.
-Baltimore chose Billy Hitchcock as their next manager, and Harris unsurprisingly followed his old boss to Houston. He coached for the Colts for three seasons, and again took the managerial reins when Harry Craft was fired in September 1964. He piloted the team for all of 1965, but was cashiered after a ninth-place finish in the National League.

-With Paul Richards moving to the Braves front office in 1966, Lum was not far behind. He managed Atlanta's AAA Richmond club before getting promoted to the helm in the big leagues in 1968. The Braves had at least a .500 record in three of his four full seasons with them, including a 93-win campaign in 1969 that took them to the playoffs. But they were eliminated by the Amazin' Mets, and Harris was ousted in the summer of 1972 with a 47-57 mark. His final tally as a major league manager was 466 wins and 488 losses (a .488 win percentage).
-Lum also worked in scouting for a while. He passed away due to complications from diabetes in 1996, at age 81. 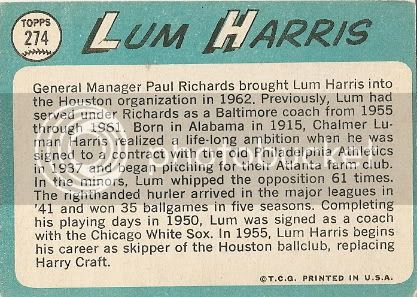