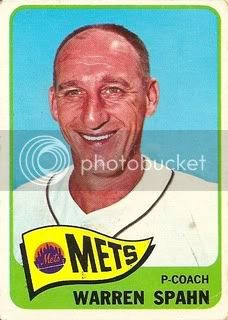 Hey, here's a rarity for this set: a card that I outright bought. Last September I was performing in a play at my alma mater, and I went on a stroll through historic downtown Chestertown with my friends. There was a secondhand/gift shop selling all matter of things. I spotted a couple of nine-card binder sheets with 1950s-1970s cards in them selling for ten bucks each. So essentially, I got this card for $1.12! As for this featured card, Spahnie couldn't have been overly thrilled to see his shiny bald head put on display like that. Topps could've been merciful to an aging legend and just airbrushed the Braves logo off of his cap.

-Buffalo, NY native Warren Spahn was a teenager when he signed with the Boston Bees (a.k.a. Braves) in 1940.

-He had a brief and inauspicious taste of the major leagues in April and September 1942, allowing 25 hits and 11 walks in 15.2 innings. He also drew the ire of Boston manager Casey Stengel for refusing to throw at Pee Wee Reese in an exhibition game. As the legendary skipper later said, "You can't say I don't miss 'em when I miss 'em."

-It took Spahn four years to make it back to the big leagues. In between, he earned a Purple Heart and a Bronze Star for his heroic service in the U.S. Army during World War II.

-You've likely heard the phrase "Spahn and Sain and pray for rain" to describe the old Braves' pitching staff. It came into being after the pair won eight games in a ten-game span of the schedule from September 6-18, 1948. Scheduled off days and rainouts helped make the duo's run possible. It was part of a 14-1 stretch that sewed up the National League pennant for Boston. They went on to lose to the Indians in a six-game World Series, with Spahn losing a Game Two start before earning a win with 5.2 innings of one-hit relief in Game Five. He came back the next day to toss two more innings of relief, but allowed a crucial run in the top of the eighth to give the Tribe a 4-1 lead. The Braves rallied for a pair in the bottom half of the inning, but got no closer. For the Series, the lefty allowed 4 runs in 12 innings, striking out 12 and walking 3.

-He won his only Cy Young Award in 1957, when he topped the N.L. in wins (21-11) and complete games (18) and sported a team-low 2.69 ERA. He took the loss in Game One of the World Series (3 ER in 5.1 IP), but gutted out a 10-inning, 5-earned-run complete game win in Game Four. His rotation-mate Lew Burdette earned three complete game victories of his own, giving Spahn his only championship.

-He was a first-ballot Hall of Famer in 1973, and the Braves have retired his #21. There is a statue depicting him in mid-windup on the grounds of Atlanta's Turner Field. He was present for the dedication in 2003, a few months before his death of natural causes at age 82. 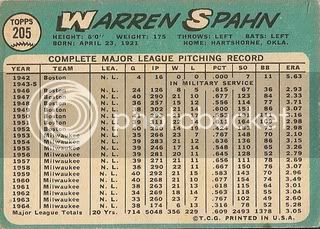