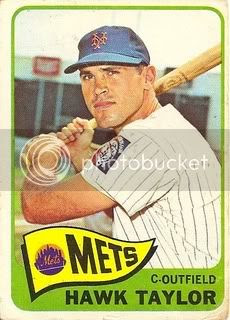 Does anyone know why they called Robert Dale Taylor "Hawk"? An inquiring mind wants to know.

-Forced by bonus baby rules to remain on the major league roster, the 18-year-old appeared in only seven games and received a single at-bat. The following year, he got eight at-bats in four games.

-The young catcher showed power potential in the minors with 23 home runs in 1958 and 17 a couple years later, but continued to languish behind Joe Torre and other Milwaukee starters. He received only 117 plate appearances in parts of 5 seasons with the Braves.

-His first big league homer came on October 1, 1961. With the Braves trailing the Giants 2-1 in the bottom of the ninth, Taylor pinch hit for Roy McMillan and tied the game by taking Mike McCormick deep. Milwaukee won it in the tenth with a walkoff single by Al Spangler.

-On June 20, 1964, he replaced injured catcher Chris Cannizzaro in the second inning of a game vs. the Phillies and went wild. His 4-for-5 day included a pair of two-run home runs as New York won 7-3.

-For someone who didn't play regularly, Taylor had his share of memorable home runs. On August 17, 1966, his fourth-inning clout off of Pirates pitcher Bob Veale was the first pinch-hit grand slam in Mets history. It keyed a comeback from a 7-1 deficit as the Mets went on to win 8-7.

-With the Royals in 1969, Hawk appeared in 64 games, including a league-high 52 as a pinch hitter. He batted .270 with 3 homers and 21 RBI. Each of his home runs was a three-run shot that gave Kansas City the lead. 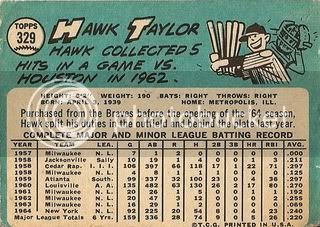