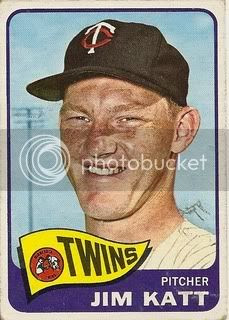 Wait a minute..."Katt"? Yep, this is one of the most glaring errors in the set. I'd be willing to give Topps a pass if "Kitty" wasn't already an All-Star and a three-time Gold Glover when this card was made. Oh well, nobody's perfect.

-He debuted in 1959, but was hit around in a handful of appearances. Earned his first career win on April 27, 1960, allowing four runs (one earned) on three hits and two walks in a 5-4 final over the Yankees.

-Kaat earned an All-Star selection in his second full season, going 18-14 with a team-best 3.14 ERA, as well as 16 complete games and a league-high 5 shutouts for the Twins in 1962. He also won the first of 16 Gold Gloves, a record later surpassed by Greg Maddux.

-He was a crucial member of the pennant-winning Minnesota team in 1965, going 18-11 with a 2.83 ERA and an American League-leading 42 starts. He outdueled Sandy Koufax in Game 2 of the World Series, going the distance in a 5-1 victory. However, he was knocked out early in subsequent starts in the fifth and decisive seventh games, taking the loss in each instance. Considering that Koufax pitched shutouts in both of those games, there's probably not much that Kaat could have done anyhow.

-As play began on Friday, September 1, 1967, the "Impossible Dream" Red Sox were clinging to a half-game lead over the the Twins for the pennant. Kaat, whose record was a mere 9-13 at the time, earned his tenth win that evening with a complete-game effort against Detroit. It was the first of seven straight starts that the southpaw would win. He went 7-0 with a 1.51 ERA in September, but things finished on a sour note. The Twins had taken a one-game lead on Boston entering a season-ending two-game series between the clubs at Fenway. Kaat started the opener on three days' rest, and tossed two scoreless innings before injuring his arm in the third. Ron Kline took the loss in relief, a 6-4 final. Boston prevailed 5-3 in the finale to advance to the World Series.

-After a three-year stint with the Phillies, the fortysomething Kaat finished his career as a reliever with the Yankees (1979-1980) and Cardinals (1980-1983). He pitched in relief in each of the first four games of St Louis' World Series win over the Brewers in 1982, allowing one run in two and one-third innings.

-Kaat was the last active member of the original Washington Senators, as well as the last active player whose career began in the 1950s. He and Nolan Ryan are the only two men to play in the major leagues during seven different Presidential administrations - for Kaat, it was Eisenhower, JFK, LBJ, Nixon, Ford, Carter, and Reagan. In parts of 25 seasons (a record later broken by Tommy John and Ryan), Jim was 283-237 with 18 saves, 130 complete games, a 3.45 ERA, and 2,461 strikeouts.

-Jim seems to be ensconced firmly in the "Hall of Very Good", having earned enough votes to stay on the Hall of Fame ballot for the full 15 years but topping out at 29.6%. He fared better in Veterans Committee votes in 2005 and 2007, but still came up short. He served as Pete Rose's pitching coach for the Reds in 1984-1985, and has spent most of the proceeding 26 years as a TV analyst for the Twins and Yankees. He has also done national broadcasts of both amateur and pro games for NBC, ESPN, CBS, and ABC. He is now calling games for the MLB Network.