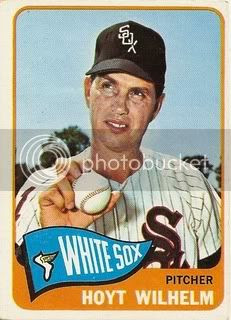 This is a card that I'm particularly excited to have. I wonder if Hoyt Wilhelm ever got tired of posing for photos while exhibiting his knuckleball grip. I mean, it is the pitch that made him famous.

-Hoyt was born in Huntersville, NC. After graduating from high school, he pitched for Mooresville of the independent North Carolina State League in 1942. He was then drafted into the U.S. Army and served three years in World War II, earning a Purple Heart for being wounded in the Battle of the Bulge.

-In 1946, he returned to Mooresville and won 41 games in two seasons. The Braves acquired him, but lost him in a minor league draft to the Giants a month later.

-Wilhelm was 29 by the time he made the Giants' big league club in 1952, but he came equipped with a great knuckleball. He'd learned the pitch in his youth by emulating former Senators moundsman Dutch Leonard. Hoyt used the knuckler to go 15-3, leading the National League in winning percentage, ERA (2.43), and games pitched (71). He also compiled 11 saves, but finished a distant second to Dodgers reliever Joe Black, who put up comparable numbers but had the added benefit of playing for the pennant winner.

-He went to the first of five career All-Star Games in 1953, but had his best year as a Giant in 1954. That season, he went 12-4 with 7 saves and a 2.10 ERA (194 ERA+). He appeared twice in the club's four-game World Series sweep of the Indians, allowing a single hit in two and a third scoreless innings and picking up a save in Game Three.

-After his performance slipped in the ensuing seasons, the Giants traded him to the Cardinals in February 1957. He was then waived twice within a year, going first to Cleveland and then to Baltimore. It's somewhat surprising that the Tribe put him on waivers, as he had a 2.49 ERA in 90.1 innings to that point, but it wound up paying almost instant dividends. On September 20, 1958, he no-hit the Yankees in just the ninth start of his career.

-By mid-1960, Wilhelm was back in the bullpen. Over the next three seasons, he won 27 games and saved 40 more for the Orioles with a 2.63 ERA. Prior to the 1963 campaign, he was traded to the White Sox in a six-player deal that brought legendary shortstop Luis Aparicio to Baltimore.

-Though he was 40 when he arrived in Chicago, the cagey veteran (I've always wanted to say that) saved 92 games in six seasons with the team, compiling a 1.92 ERA in 675.2 innings. He seemed to be improving with age.

-He managed in the low minors for the Braves organization in 1973 and 1975. Wilhelm was inducted into the Baseball Hall of Fame in 1985, which was his eighth year on the ballot. He was 80 when he died of heart failure in Sarasota, FL in 2002. 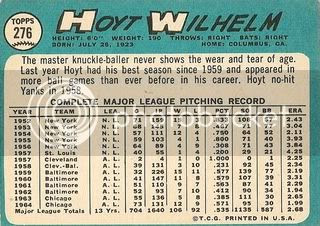