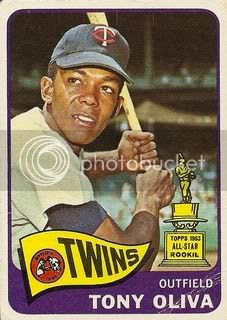 Okay, one last card from December's "pack" from Randy. You may have noticed that all five of these players were very good at baseball. If you were a kid in 1965 and you got a pack with Tony Oliva, Hoyt Wilhelm, Joe Torre, Norm Cash, and Gil Hodges, you probably would have passed out. Thanks again, pal!

-After short stints in the majors in 1962 and 1963, Tony became the Twins' everyday right fielder in 1964 and captured American League Rookie of the Year honors. He also made the first of eight straight All-Star teams, and led the league with 109 runs scored, 217 hits, 43 doubles (the first of four career doubles crowns), a .323 average, and 374 total bases. In addition, his 9 triples, 32 home runs, and .557 slugging percentage would all prove to be career highs.

-He repeated as batting champ in 1965 with a .321 mark, doubled 40 times, and drove in 98 runs in helping the Twins capture the pennant. He finished second to teammate Zoilo Versalles in MVP voting.

-Oliva won his only Gold Glove in 1966, a year in which he committed 10 errors (the most by any outfielder) but also ranked highly in advanced metrics like range factor, total zone runs, and defensive wins above replacement (WAR). Maybe the voters were ahead of their time, but I suspect that his .307 average and 25 homers had more to do with it.

-In a June 29, 1969 doubleheader at Kansas City, the outfielder collected hits in eight straight at-bats. He went 3-for-4 in the opener, stroking three singles after a flyout in his initial trip to the plate. In the nightcap, he went 5-for-5 with a pair of home runs, a double, and 5 RBI as the Twins romped 12-2 to salvage a split.

-He coached with the Twins from 1976-1978 and 1985-1991. He has been a minor league hitting instructor ever since. The Twins retired his #6 in 1991 and selected him as a charter member for the club's Hall of Fame in 2000. Just last April, they unveiled a statue in his likeness at Target Field. 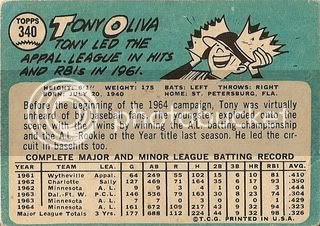