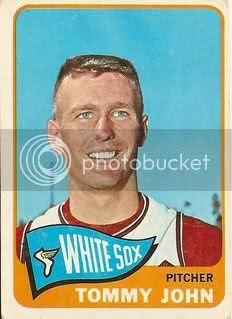 Tommy John's name is synonymous with the elbow ligament replacement surgery that was patented by Dr. Frank Jobe. I realize that Dr. Jobe has benefited financially from his medical breakthrough, but I can't help but wonder whether he's bitter over it. Wouldn't you think they'd call it Frank Jobe surgery?

-Tommy was born in Terre Haute, IN. He was a star basketball player in high school, but signed with the Indians in 1961 because he thought his career prospects in baseball were better.

-He was only 20 when he debuted with Cleveland in September 1963. The following May 3, he earned his first career win by shutting out the Orioles on three hits.

-A three-team trade sent John to the White Sox in 1965. To reacquire slugger Rocky Colavito, the Tribe gave up John, Tommie Agee, and Johnny Romano. The young southpaw went 14-7 with a 3.09 ERA in his first season in Chicago.

-In December 1971, Chicago dealt him to the Dodgers for slugger Dick Allen. He benefited greatly from pitching for a contender, winning 73 percent of his decisions (40-25) in his first three years in L.A. However, his career looked to be over on July 17, 1974. Pitching against the Expos, he allowed the first two batters to reach in the third inning before blowing out the ulnar collateral ligament in his left elbow while facing Hal Breeden. In a revolutionary procedure, Dr. Frank Jobe replaced the torn UCL with a ligament from John's right forearm. The rest, as they say, is history.

-Following more than a year of rehabilitation (assisted by teammate and physical fitness guru Mike Marshall), Tommy returned to the Dodger rotation in 1976 and went 10-10 with a 3.09 ERA and a league-best 0.3 home runs allowed per nine innings. He was named N.L. Comeback Player of the Year, and went on to pitch in the big leagues for 14 years post-surgery.

-He had his greatest stretch of success from 1977-1980. He won 20, 17, 21, and 22 games in those four seasons, went to three All-Star Games, and had a pair of second-place finishes in Cy Young voting. He also signed a lucrative free-agent deal with the Yankees prior to the 1979 campaign.

-Since hanging up his spikes, Tommy has broadcast games for the Twins and done some managing and coaching. He was a pitching coach in the Expos organization in 2002-03 and managed the New York-Penn League's Staten Island Yankees in 2004. From 2007-09, he managed the independent Bridgeport Bluefish. He is not currently in the Hall of Fame, having garnered just 31.7% of the vote in 2009, his final year on the ballot. 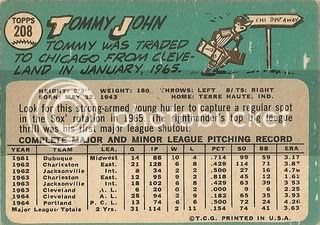