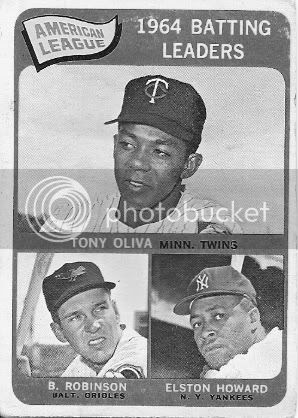 Now we're getting into a chunk of cards that I received from Don in exchange for various set building needs of his (mostly 1993 Donruss). I also sent him a stack of Tigers, as he's a team collector as well. I haven't run into many Tigers fans in trading. It's mostly Red Sox and Mets and to a slightly lesser extent, Yankees. But that's just my experience. Anyway, the first card from Don is one of the bookends of the set. I remember reading in a Beckett magazine that the first and last card of vintage sets are among the hardest to find in good condition, as kids in those days would keep their cards in place by binding them together with a rubber band. This one's in good shape though.

This is the second time we've seen Brooks Robinson on a leaders card, coming off of his MVP season of 1964. He was runner-up in batting average to Tony Oliva, who hit .323 to win the crown as a rookie. Oliva would repeat in 1965 (.321), and recently schooled his grandson in Wii Sports baseball. Brooksie hit .317 as part of a top ten finish in each of the Triple Crown categories (1st in RBI: 118, tied for 10th in HR: 28). Ellie Howard was the first black Yankees player, and had his last great season, hitting .313 at age 35. I enjoy the in-depth listing of the top batters on the card back, as Topps goes fifty deep. You can see that the pitching was pretty strong, with Mickey Mantle, Floyd Robinson, and Bill Freehan being the only other hitters in the American League to bat .300. Although he hit just .246, I'm sure Tom Tresh slept well at night knowing that he was the fiftieth-best batter in the league in 1964! 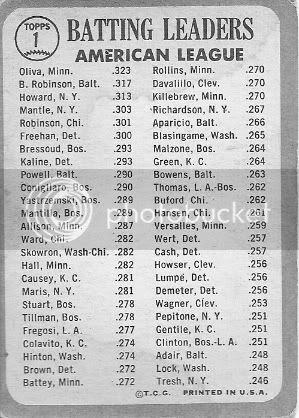