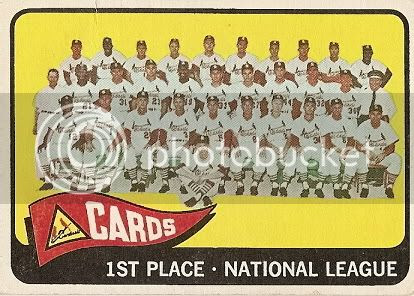 The two things that stand out about this team card (other than the lemon yellow background) are the classic striped stirrups and the grinning bus driver in the middle row, far right. It was nice of the Cardinals to let Jackie Gleason in on their team portrait. At the time this photo was taken, this was Johnny Keane's St. Louis team. Of course, we've already seen him bolt to the Yankees, leaving the Cards in the hands of Red Schoendienst.

The Cardinals won the whole ball of wax in 1964, besting an end-of-an-era Yankee team in a back-and-forth seven-game World Series. In the regular season, they had the same 93-69 record that they had compiled the previous season. Whereas they finished six games behind the Dodgers in 1963, the Redbirds managed to eke out the National League pennant by a single game over both the Reds and Phillies the following year. The Giants (three games) and Braves (five games) also finished within striking distance in a thrilling pennant race. St. Louis scored 715 runs (second-best in the N.L.), and allowed 652 (fourth-worst), and outplayed their run differential by five wins. 1,143,294 fans piled into Sportsman's Park in 81 home games, placing their attendance squarely in the middle of the league.

After hovering around .500 in their first two seasons under Red Schoendienst, the Cardinals returned to the World Series in both 1967 and 1968, beating the Red Sox in the former and bowing to the Tigers in the latter. St. Louis wouldn't return to the postseason afterward until 1982, when Whitey Herzog's team won its only world title in the first of an eventual three 1980's trips to the Fall Classic. 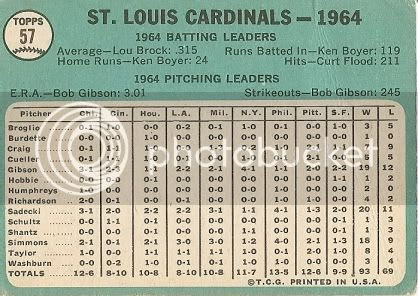