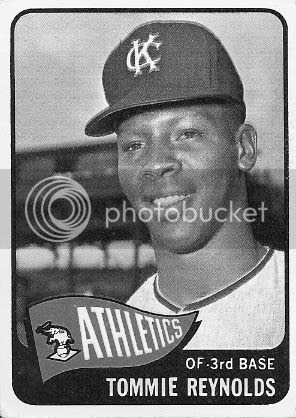 I really need to get cranking with these entries, because I got a significant box of 1965 Topps cards in the mail today. How significant? I haven't even had time to sort them yet! Thanks to reader Jamie, who hopefully will get to see some of his contributions sometime before 2010. Today's special is Tommie Reynolds, who sneaked into a box of Orioles that Jim of the Garvey, Cey, Russell, and Lopes blog sent me. In return, I sent a parcel of Dodgers and Twins. Thanks, Jim!

-Hailed from Arizona, LA. Signed with the A's as an amateur free agent in 1963.

-Hit .332 with 27 home runs with the A-level Burlington Bees in his first pro season to earn a late-season promotion to Kansas City.

-His first career home run was a three-run shot off of the Tigers' Mickey Lolich on April 30, 1964, part of a career-best 4-RBI game. He owned Lolich throughout his career, hitting 15-for-28 (.536) with a triple and two home runs (the only pitcher he took deep twice).

-Was a Rule V draftee twice in his career: the Mets claimed him from the Athletics in 1966, and then the A's claimed him back two years later.

-His major league career ended after a swing through Milwaukee in 1972, but the career .226 hitter continued to play well at AAA for the Brewers until 1978. 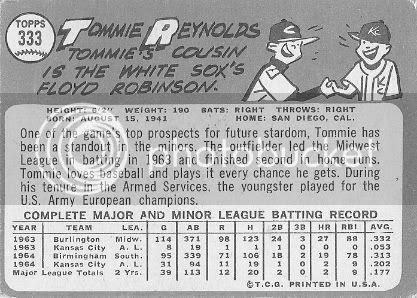