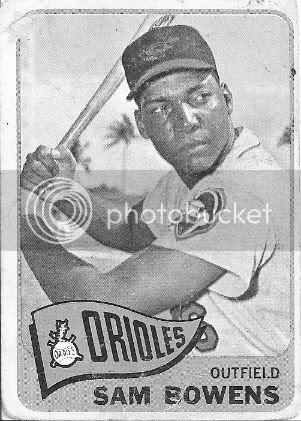 Whoops! I went a bit out of order in posting the AL Batting Leaders card from Don. Before I traded with him, I got a couple of well-loved Orioles from Ed in one of our face-to-face swap meets. First up is Sam Bowens, whose card redefines the term "rounded corners". I like it.

-Born in Wilmington, NC, Sam played for the Nashville Elite Giants of the Negro League and attended Tennessee State University before signing with the Orioles as a free agent in 1960.

-Spent parts of three years in the minors with the Rochester Red Wings, where he was acknowledged by some as the fastest player in the league.

-Hit .263 with 22 home runs and 71 RBI that year, tying an Orioles rookie record for longballs that has since been broken by Cal Ripken, Jr.

-Could not follow up on his strong freshman effort, struggling with a leg injury, alcoholism and a 1965 beaning. He hit no higher than .210 in any subsequent season.

-Hung on as a major leaguer for six seasons in total, largely on the strength of his glove and powerful throwing arm.

-Though he played for the Orioles in 1966, he did not get into a single World Series game.

-Finished his career with the Senators. When they optioned him to the minors in 1969, he took his sweet time reporting...13 days total.

-Sam died in Wilmington in 2003 at age 64. He was survived by three children, all of whom lived in Indianapolis, IN at the time of his death. 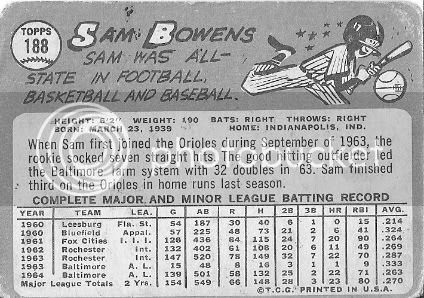