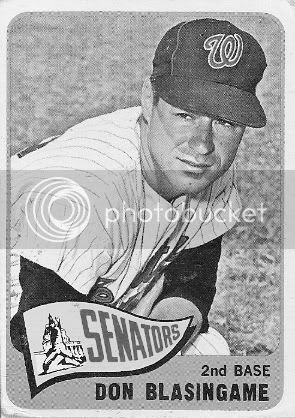 After a false start, we're back to my trade with Don. The next card is a player named Don - what are the odds? I think I actually like this Senators hat, with the red "W" and piping on navy, rather than the white-on-red or white-on-navy that the Nationals went with in the mid-2000s. Don Blasingame certainly wears it well, anyhow.

-A native Mississippian, Don signed with the Cardinals in 1953.

-Replaced Red Schoendienst as the Cards' everyday second baseman in 1956, his rookie season.

-One of his St. Louis teammates in 1956-1957 was his future father-in-law, catcher Walker Cooper!

-Was one of the hardest batters to double up in baseball history; he grounded into one double play per 123 at-bats, second all-time behind Don Buford.

-Four times in his career, Don collected his team's only hit in a game; Cesar Tovar and Eddie Milner hold the record with five such hits each. 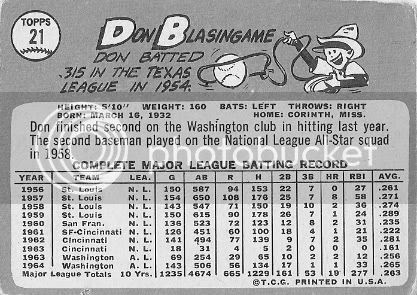