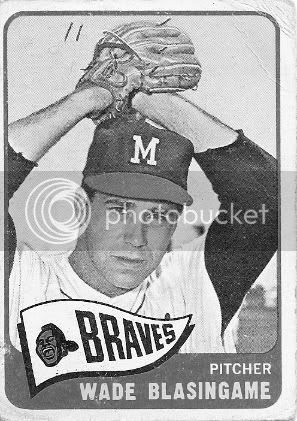 Sheesh, I didn't think I'd be going a week without posting. Busy times at work, and an even busier weekend - I was home for a grand total of four hours from Friday through Sunday. But let's get back on track with our second Blasingame in the last three cards. Wade Blasingame is not related to Don, believe it or not. I'm not sure of the significance in the two ink lines at the top of the card; maybe it was the second copy of this card that a previous owner pulled, or perhaps Wade was his 11th-favorite player.

-Had a promising rookie season, going 9-5 with a 4.24 ERA as a swingman in 1964. Manager Bobby Bragan said that he had the best curveball in the league.

-Started the last Braves home game in Milwaukee on September 22, 1965. He was chased in the fifth inning, having earned six runs. He did outlast the opposing starter, Sandy Koufax (5 ER in 2 IP).

-Suffered from a fractured finger and sore arm the following year, which seriously curtailed his effectiveness.

-In 1971, hit the last of his three career home runs, a solo shot off of Steve Carlton. 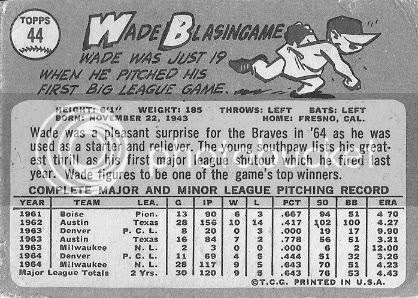