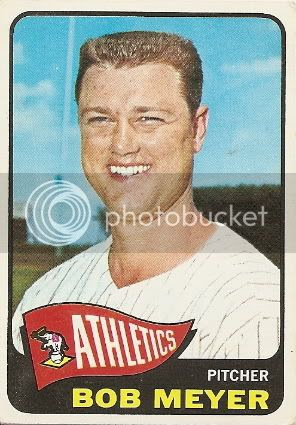 Now we're back to the heaping package of 1965 Topps cards that I received from Jamie Whyte. I'd started reviewing the contents a few months ago, but was rudely interrupted by my own absent-mindedness, when I suddenly remembered that I'd forgotten to account for several cards that I'd received earlier on. Clear as mud? Sure. As to this card in particular, I'm starting to think that I should have kept a running tally of flat-top haircuts in this set.
Fun facts about Bob Meyer:

-Bob played college ball in his hometown (at the University of Toledo) before signing with the Yankees in 1960.
-Despite underwhelming minor league numbers, he made the big league squad in 1964 at age 24.

-During his rookie season, Meyer changed teams twice; the Angels bought his contract from the Yankees in June and sold him to the Athletics the following month.
-He had two consecutive memorable starts against the Orioles. On September 7, 1964, Bob earned the only complete game victory of his career by limiting Baltimore to one run on six hits and a walk while striking out five. Five days later he allowed a single hit to the Birds in eight innings...but opposing starter Frank Bertaina matched him. None of Meyer's six walks came back to hurt him, but the lone hit he yielded was a double to John Orsino. A bunt and a fly ball plated Orsino with the game's only run, as Meyer was a hard luck loser despite going the distance (the host O's did not need their at-bats in the ninth).

-In all, Bob was 2-8 with a 4.37 ERA in his first taste of the majors.
-The A's kept the southpaw for four and a half more seasons, but left him in the minors for the duration. A trade to the first-year Seattle Pilots in 1969 finally gave him an opportunity to return to the American League. He put up a 3.31 ERA in six games in his new digs, but lost all three of his decisions.

-His best start as a Pilot came on September 1, 1969, as he allowed a single unearned run to the Yankees on four hits but departed after nine innings with the score tied at 1-1. Seattle eventually won the game with a four-run thirteenth inning.
-Bob followed the Seattle franchise to Milwaukee the following year, but was hit hard in ten relief appearances. The Brewers released him in March 1971 to close the book on his career.

-In parts of three seasons, he was 2-12 with a 4.38 ERA. He struggled with his control throughout his career, walking 5.6 batters per nine innings in his big league experience and doing even worse in the minors (5.8 BB/9). 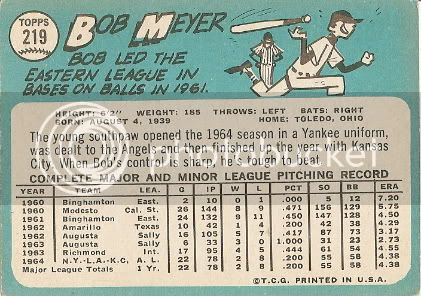