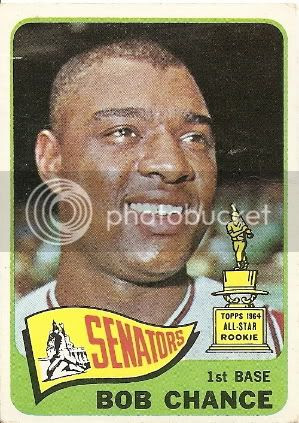 It's not every day that you find a Rookie Cup player who was traded in the same offseason that he received the honor. But here's Bob Chance with that telltale missing hat...

-Born in Statesboro, GA, Bob signed with the Giants in 1961.

-After his first pro season, he was drafted out of San Francisco's organization by the Indians.

-Was promoted to Cleveland at the end of that season, turning some heads in a sixteen-game trial (.288, six extra-base hits in 16 games).

-Bob hit .340 with four homers and a pair of doubles against Washington during his career year, so naturally the Senators traded for him prior to the next season. Manager Gil Hodges proclaimed that his new first baseman had potential to be a league-leading hitter, but Chance struggled with his weight and hit a disappointing .256 with four homers in 72 games in 1965.

-He also played for the Yakult Atoms in Japan.

-His son Tony played 19 seasons of pro ball, but never made it to the big leagues. He was a .269 hitter with 202 career home runs. 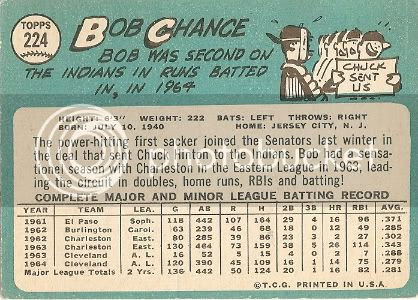