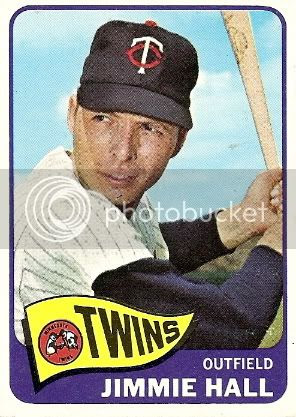 This card finally brings us to the end of another big ol' mess of cards from Max. Thanks again, pal!

-Jimmie was born in Mount Holly, NC, and signed with the Senators in 1956.

-Low batting averages and multiple position switches kept him in the minors for his first seven pro seasons.

-Hall made the Twins' roster at the beginning of 1963. The rookie soon earned a starting spot in the outfield, and hit .260 while setting an American League record for first-year players with 33 homers. He also drove in 80 runs, finishing third in Rookie of the Year voting.

-Though he dropped to 25 homers and 75 RBI in his sophomore season, Jimmie improved his average to .282 and made the All-Star team.

-Jimmie played only twice in the 1965 World Series due to his poor track record against lefties. The Dodgers started a lefthander in five of the seven games and came out on top.

-With his move to the bench, Jimmie's power soon evaporated. He hopped from California to the Indians to the Yankees to the Cubs to the Braves in the span of three years. 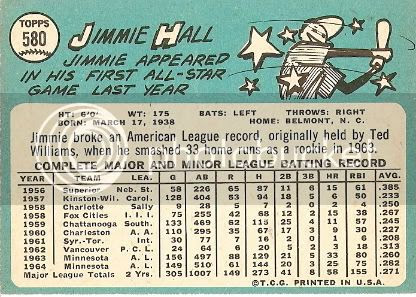