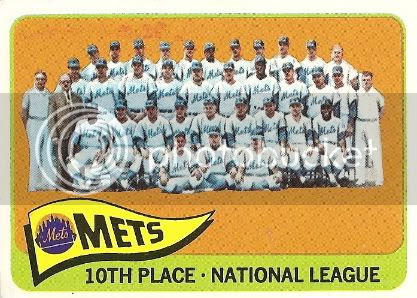 Ah, the New York Mess. Sure, it’s an old and lame joke, but those first few Mets teams were pretty bedraggled, and they certainly look a mess with the orange and lime green color scheme that Topps chose for their team card.

In just their third year of existence, the Mets occupied a familiar slot: dead last in the National League. Their 53-109 record was a two-game improvement over the previous year, at least. Still, Casey Stengel’s boys finished 40 games off the pace of the pennant-winning Cardinals and a full 13 games behind ninth-place Houston. They allowed over 200 runs more than they scored (776 RA, 569 RS) and were at the bottom of the league in both counts. However, the grand opening of Shea Stadium in Flushing, NY allowed the large-market Mets to place second in the National League in total attendance with 1,732,597 visitors. You certainly couldn’t say that New York wasn’t big enough for two baseball teams!

Met hitters as a whole placed in the bottom three among NL teams in every significant category except doubles (they were fourth-worst with 195). They hit .246 with a .296 on-base percentage and slugged .348. The leading batsmen in the New York attack were 23-year-old second baseman Ron Hunt (.303, 6 HR, 42 RBI) and right fielder Joe Christopher (.300 with a team-leading 50 extra-base hits and 76 RBI). Third baseman Charley Smith was the only player to hit 20 home runs but mustered only a .275 on-base percentage.

The pitchers were even worse than the hitters, bringing up the rear in statistical categories such as ERA (4.25), saves (15), hits allowed (1511), and runs and earned runs allowed (776 and 680). They were also last in wins, obviously. The four primary starters each lost between 16 and 20 games, though none was exceptionally awful. Tracy Stallard in particular gave the club 225.2 innings with a 3.79 ERA, but you would’ve had to cut that number in half to come out ahead on that team. No Mets reliever topped five saves, but Bill Wakefield appeared in 62 games with a solid 3.61 ERA.

You probably know the rest of the story. The Mets lost 100 games five times in their first seven seasons, and set a team record with a 73-89 mark in their seventh year of existence. Then they stunned the baseball world by winning 100 the following year (1969), catching the Cubs down the stretch to capture the NL East crown. They rolled over the Braves in the NLCS and upset the 109-win Orioles in the World Series to earn the nickname “the Amazin’ Mets”. Of course, the 1973 New York squad took the dominant Oakland Athletics to seven games before losing the World Series, despite winning only 83 games in the regular season; if that’s not amazing, I don’t know what is! 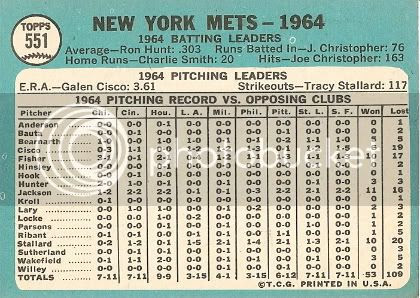