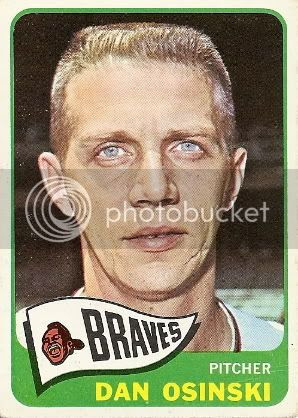 Dan Osinski looks kind of pale, gaunt, and weary in this photo. It reminds me of my own physical appearance Monday night, after two straight ten-hour days of home improvements followed by a 6:45 AM-3:15 PM shift at work. Wake me in about a month.

-A native of Chicago, IL, Dan signed with the Indians as a teenager in 1952.
-His path to the majors took several detours, as he walked tons of batters as was out of organized ball for two years following his release from the Cleveland system. His hometown White Sox gave him a second chance, but he didn't go beyond Class A ball in three seasons in their organization.

-After being picked up by the Athletics in the previous offseason, Osinski finally made his big league debut in 1962. The 28-year-old was hit hard in four appearances for K.C., but pitched well back in the minors and showed improvement following a midseason trade to the Angels. He won six and saved four out of the L.A. bullpen with a 2.82 ERA.
-In a swingman role in 1963, Dan set career highs in wins (eight), complete games (four), innings pitched (159.1), and strikeouts (100) while posting a 3.28 ERA.

-On June 4, 1963, he tossed the first of two career shutouts, three-hitting the White Sox and striking out eight.
-After another good effort the following year (3.48 ERA), he was traded to the Braves and ranked eighth in the N.L. with 61 appearances in 1965 and pitched to a 2.82 ERA.

-Osinski also spent two years in Boston. With the 1967 "Impossible Dream" club, he set personal bests with a 2.54 ERA and 1.18 WHIP. He appeared in relief in two World Series games but did not do anything of note.
-After spending all of 1968 at AAA Hawaii, Dan lasted another two years in the majors, throwing effectively for the White Sox in 1969 before stumbling in a brief look at Houston the next year. On the plus side, his final pitch as a major league produced a Willie Mays groundout. 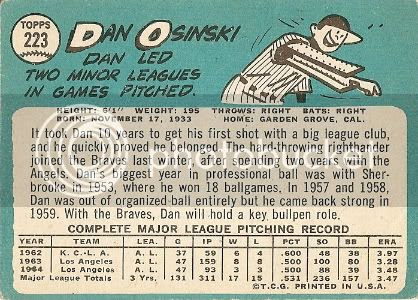