Here they are, on full display: the oh-so-rare Orioles jerseys with block lettering! Baltimore wore these home uniforms for just one year -1964- before returning to their customary script lettering. Personally, I prefer the script to the somewhat austere-looking block. Your mileage may vary.
For much of 1964, the young and hungry Orioles had their way with the American League. After finishing within eight games of first place only once in their previous ten seasons in Charm City, Hank Bauer's boys spent 111 days in first place. The team ran out of steam in the end, being edged out by the Yankees by a 2.5 game margin. To add insult to injury, the White Sox slipped past them into second place, finishing a mere half a game ahead of the O's. Still, a new franchise record of 97 wins is nothing to sneeze at; neither is a healthy runs scored vs. runs allowed ratio of 679-567. Baltimore ranked fourth in the ten-team American League in attendance with 1,116,215 rooters passing through Memorial Stadium that year.
The O's didn't do a whole lot with the bats, ranking in the middle of the pack in most offensive categories, including sixth in runs. However, they were second in doubles with 229 and in steals with 78 (though 57 of those swipes came from All-Star shortstop Luis Aparicio). There were some individual standout performances, mostly notably AL MVP and All-Star starting third baseman Brooks Robinson. "Hoover" led the O's with a .317 average, 35 doubles, and an AL-best 118 RBI, and stroked 28 homers to boot. He and Aparicio also took home Gold Gloves. 22-year-old outfielder Boog Powell made his presence known by leading the league in slugging at .606. He also hit a team-best 39 homers, and batted .290 with a .399 on-base percentage and 99 RBI. Right fielder Sam Bowens set a new team record for rookies with his 22 round-trippers, and first baseman Norm Siebern joined Aparicio and Brooks on the All-Star team (.379 OBP, 24 doubles).
The pitching staff was an intriguing mix of savvy veterans and emerging youngsters, and they tossed up a cumulative 3.16 ERA that ranked fourth in the loop. Future Hall of Famer Robin Roberts was (at age 37) a full decade or more older than every other starting pitcher in the regular rotation. His 13-7 record and 2.91 ERA were strong, but qualified him for the third slot among O's starters. Righthander Milt Pappas had one of the best years of his career, going 16-9 with a 2.91 ERA and seven shutouts. But the real story was 19-year-old rookie Wally Bunker, who topped the team with a 19-5 record and a 2.69 ERA and 1.04 WHIP. He also completed a dozen games. Meanwhile, a trio of greybeards (Stu Miller, Harvey Haddix, and Dick Hall) shortened games in relief, led by Miller’s 23 saves and Hall’s ridiculous stat line of 9-1, 1.85 ERA, 0.84 WHIP. Overall the three were 21-13 with 40 saves, a 2.43 ERA, and a 1.01 WHIP. Not bad for a bunch with an average age of 35 and a half! NOTE: Hall does not have a card in the 1964-1966 Topps sets. I've heard that he had an exclusive contract with Fleer during that time, but I could be mistaken.

The future for the Orioles turned out to be as bright as their 1964 near-miss suggested. After another painful third-place finish in 1965, Baltimore picked up slugger Frank Robinson in a trade that proved to be a catalyst. The Birds won their first World Series in Robby’s debut season with his new team, and would go on to make four appearances in the Fall Classic during his six years with them (winning again in 1970 and losing in 1969 and 1971). They remained one of the top teams in the American League for another decade after Robinson’s departure, and in 2010 they will return to their rightful place among baseball’s elite. 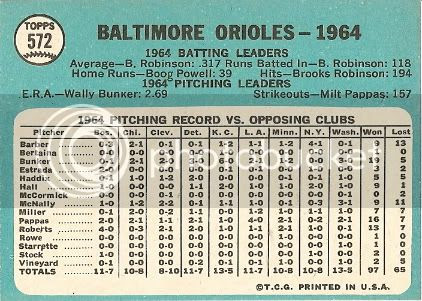