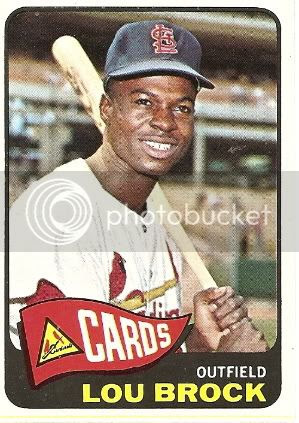 We're nearing the end of the impressive run of cards that Max sent my way. The last few in this bundle are lesser lights, so please enjoy one more Hall of Famer for the road!
Fun facts about Lou Brock:

-Hailing from El Dorardo, AR, Lou played college ball at Southern University and A & M College before signing with the Cubs in 1960.
-Chicago promoted Brock at the end of his first pro season and he never went back to the minors. However, his first few seasons were marked by uneven production, and the club traded him to the Cardinals in June 1964. Though six players in all changed teams, history has abbreviated the fateful deal as Brock-for-Ernie Broglio.

-Lou was revitalized in St. Louis, as were his new teammates. The Redbirds were 28-31 when they acquired the speedy outfielder but went 65-38 afterward to leapfrog seven other teams and capture the National League pennant and outlast the Yankees in the World Series. Brock hit .348 and slugged .527 in his new digs, swiping 33 bases and scoring 81 runs in 103 games to crack the top ten in MVP voting. He also hit .300 and drove in five runs in the Series.
-Led the league in stolen bases eight times between 1966 and 1974, including a major league record 118 swipes in 1974. Rickey Henderson ultimately topped that mark with 130 thefts in 1982.

-Played some of his best ball in 1967, when he became the first player to hit 20 home runs and steal 50 bases in the same season. He also hit .299 and was named to the first of six All-Star teams. He capped it all with a World Series MVP award, as he hit .414 with eight runs and seven steals in the Cards' seven-game triumph over Boston.

-Was even better in the 1968 Series, hitting .464 and slugging .857 with another seven thefts, but the Tigers outpitched St. Louis in another seven-gamer.

-In 1969, the Cardinals were the opposition in the Montreal Expos' first home opener. As the visiting leadoff hitter, Brock was the first major league player to bat in Canada in the regular season.

-The Cards retired his #20 in 1979. In 1985, he was elected to the Baseball Hall of Fame in his first year on the ballot. Each year, the National League honors its leading base stealer with the Lou Brock Award.

-After hanging up his spikes, Lou became a successful businessman, most notably running a florist shop. His son, Lou Junior, was a two-sport star at the University of Southern California and briefly played for the Chargers, Lions, and Seahawks in the NFL (1987-1988). Brock and his wife are also both ordained ministers at Abundant Life Fellowship Church in St. Louis. 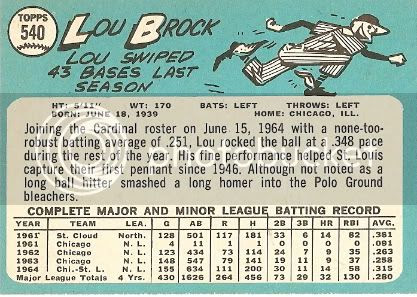