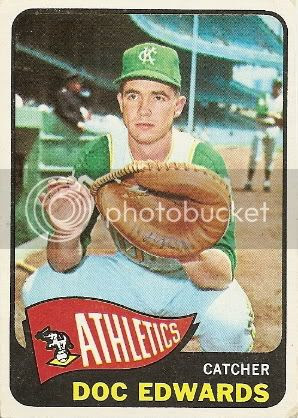 Correct me if I'm wrong, but it looks like Doc's mitt bears the signature of his contemporary, Pirates catcher Jim Pagliaroni. That's odd.
Fun facts about Doc Edwards:

-Born in Red Jacket, WV, Doc signed with the Indians at age 21 in 1958.
-His given name is Howard Rodney Edwards; he was dubbed "Doc" after a stint as a Navy medic.

-He debuted with Cleveland in 1962, hitting .273 in 54 games.
-Doc's first career home run tied a July 4 game against the Tigers in the bottom of the tenth. The Tribe would go on to put up four runs in the 13th to win.

-Edwards was traded to the bottom-dwelling Athletics in 1963 and was their primary catcher over the next two seasons.
-An underwhelming 1965 campaign (he hit .183 with the A's and Yankees) seemed to bring his major league career to a close, as the backstop spent the next four seasons in the minors.

-At age 33, Doc became the Phillies' bullpen coach in 1970. After injuries decimated the team's depth, he was added to the active roster and played in 35 games that summer. He held his own, batting .269.
-Overall, he hit .238 in parts of five big-league seasons with 15 home runs and 87 RBI.

-Edwards has remained in baseball since his retirement, managing in the Yankees, Cubs, Expos, Orioles, Indians, and Pirates farm systems. He was at the helm of Baltimore's AAA Rochester franchise in 1981 when the club was on the losing end of a 33-inning game with Pawtucket that took eight hours and 25 minutes to complete over two days! He's been managing in the independent leagues since 1995, and is currently the skipper of the San Angelo (TX) Colts.
-Doc also had a brief tenure as the major-league manager of the Indians, winning 173 games and losing 207 from 1987-1989. The club finished sixth in the American League East in 1988, his only full season. 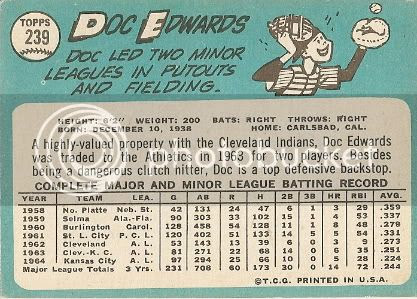