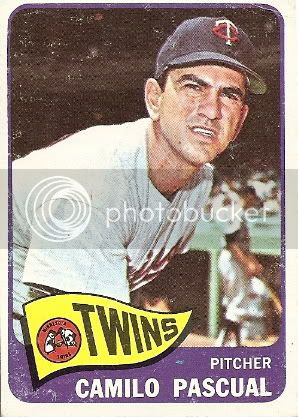 It's the little things in life that matter. Like the blurry be-stirruped Twin that is loitering in the background near the dugout. Who could it be? All I can say for sure is that it ain't Earl Battey.
Fun facts about Camilo Pascual:

-Camilo (aka "Little Potato") was originally from Havana, Cuba. He signed with the Senators in 1952 as an 18-year-old.
-His older brother Carlos pitched in two games for Washington in 1950.

-Camilo made his major league debut in 1954, but struggled with control for his first four seasons and went 20-54 with a 5.10 ERA in that span.
-He showed signs of what was to come with his 1958 performance, leading the Sens in ERA (3.15) and strikeouts (146), and posting the best strikeout-per-nine-innings mark in the American League (7.4).

-Pascual made his first All-Star team in 1959, and would go on to receive the honor in five seasons during a six-year period. That year he posted his first winning record (17-10) and led the league with 17 complete games and six shutouts, leading to a tidy 2.64 ERA. He would have two more complete game crowns and two more shutout crowns by the middle of the 1960s.

-After spending 13 years pitching for the Washington/Minnesota franchise, he was traded to...the second Senators franchise, where he spent his last two years as a full-time starter before rounding out his career with pit stops in Cincinnati, Los Angeles, and Cleveland.
-He retired in 1971, having won 174 games (fourth all-time among Cubans) and lost 170 in his 18-year career. He boasted a 3.63 ERA and completed 132 games. He struck out 2,167 batters, still 55th all time. 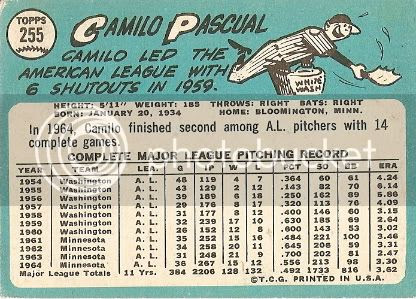